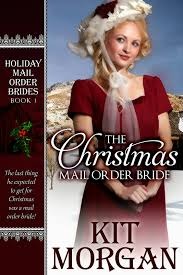 Sheriff Clayton Riley asked for a pair of boots for Christmas, not a mail order bride! Unfortunately for Clayton, his brother and mother figured a bride would look better on him than a new pair of boots! After all, he'd been sulking around long enough after the death of his wife, and his family decided it was time to take matters into their own hands and see to it Clayton had a very merry Christmas!
Summer James was young, she was beautiful and, an impoverished orphan. Who would want such a woman? Obviously no one. For here she was, eighteen and now of age to set out on her own. But New Orleans was full of men with evil intent for one such as herself, and she saw no other choice but to take the only offer for survival she could find and become a mail order bride. What she didn't count on was becoming Sheriff Clayton Riley's Christmas present!

Mainly picked this up because it helps with my reading challenge. That is why I grabbed book 2 as well. But this did intrigue my interest.

The story follows Sheriff Clayton and Summer. Clayton is given a mail order bride by his mother and his brother. He never wanted to remarry, but he was so lonely since his wife died a while back so his family took matters into their own hands. Summer grew up as an orphan and now she is looking for her own family and to escape from New Orleans. So why not try the Mail Order Bride program? What did she have to lose?

At first I was annoyed with this especially because he accidentally shot her foot. WHAT? I get accidents and all, but if I was Summer I would've left town the moment I could walk again. I know, I know it wasn't his fault and it was an accident and bad timing...but c'mon man...I would have a hard time wanting to laugh about it later.

Once I got over that annoyance, I was hooked and I wanted I had a hard time stopping.

This technically is "Christian Romance" but I think God was mentioned a couple of times? It didn't bug me at all. Super clean romance and it fit.

Loved Clayton and Summer. Summer was a cry baby, but I get it. She had a rough childhood.

Clayton's mom was adorable. Wish she could order me for one of her sons. hahaha.

I had another annoyance with the lame Charlotte and her mom. They were entertaining but they annoyed the hell out of me. BUT at the same time I was highly entertained. Such conflicting emotions. They were horrible, horrible people. Curious to see what bitch-y plans they have for the next book. hahahaha.

The narrator sounded familiar...can't put my finger on it and I took a quick look at past books of his, but couldn't find something I listened too. But he was good. His female voice made me chuckle at first, but I did get used to it.

Overall, this was entertaining and cheesy and cute. It was short so you are able to get through it quick. A couple of annoyances, but worth it. I'll give this 3 stars. Onto book 2.

Haha, I love the premise, and OMG I need to update my bingo board!

Accidentally shot her in the foot? Well, it definitely counts as an unique meet cute. I've not listened to the narrator. Glad you enjoyed it enough to want the next installment. I do love mail order bride stories. Yay for one more square!