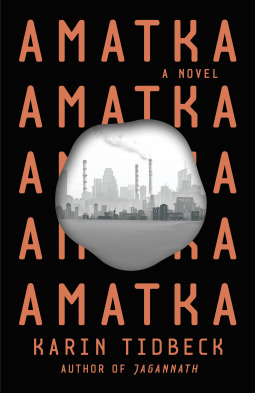 
This is one of those can not be explained books. I have read reviews calling it dystopia, but, no, not really. It is a world shaped by things they can not control, it controls them.

I assume people went through a portal, or took a ship to another planet. A planet that is alive somehow. But nothing lives there. The first people established 5 cities and tried to survive. This has turned into a strange "communist" state because that is the only way to survive.

Everything has its name written on it. Because if you loose the name then the chair, house, whatever disappears. It is a world that can not hold on to its things. And because of that the communes rule and dictate what people should do. And everyone have housemates so that no one disappears. Children grow up in "orphanages" so that they can learn the way.

It is really life and death made into a surreal fallen communist looking world. It is grey, all grey, no color at all.

And it is strangely good, because it is so effed up. I could not put it down.

Vanja, a government worker, leaves her home city of Essre for the austere, wintry colony of Amatka on a research assignment. It takes some adjusting: people act differently in Amatka, and citizens are monitored for signs of subversion.

Intending to stay just a short while, Vanja finds herself falling in love with her housemate, Nina, and decides to stick around. But when she stumbles on evidence of a growing threat to the colony and a cover-up by its administration, she begins an investigation that puts her at tremendous risk.

Strangeeeee :D U should try it

Bizarre, but yet curious! :)