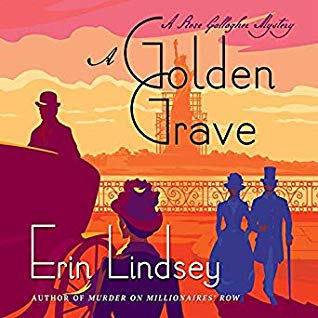 This is book 2, and even if it does work as a stand alone in a away, then you really should read book 1 first to see how it all happened.

Rose used to work as a maid, now she is a Pinkerton agent. And her new partner is the man she used to work for, and the man she has a crush on. Rose is clever, she can feel ghosts, and she will not have other agents hold her background against her.

I do enjoy how some of the Rich have something called "Luck", which of course is how they became rich. There are different sorts, like remembering everything you see, feeling where something has been and so forth. It brings in something extra in this world that also has shades and other dimensions, and that is why there are Pinkerton, special branch so the rest of the population does not find out.

Oh and yes her partner Thomas, I do like him (and they should totally get it on). A rich Englishman who is ell very English.

A hunt for a murderer who has Roosevelt as his next target. Rose trying to juggle her new life. New friends and old friends showing up. A good mystery, a good hunt.

Narration
I like Barrie's voice. She does a good voice for men and women, different accents and so on. She brings something extra to it all

Rose Gallagher always dreamed of finding adventure, so her new life as a freshly-minted Pinkerton agent ought to be everything she ever wanted. Only a few months ago, she was just another poor Irish housemaid from Five Points; now, she’s learning to shoot a gun and dance the waltz and throw a grown man over her shoulder. Better still, she’s been recruited to the special branch, an elite unit dedicated to cases of a paranormal nature, and that means spending her days alongside the dashing Thomas Wiltshire.

But being a Pinkerton isn’t quite what Rose imagined, and not everyone welcomes her into the fold. Meanwhile, her old friends aren’t sure what to make of the new Rose, and even Thomas seems to be having second thoughts about his junior partner. So when a chilling new case arrives on Rose’s doorstep, she jumps at the chance to prove herself – only to realize that the stakes are higher than she could have imagined. Six delegates have been murdered at a local political convention, and the police have no idea who–or what–is responsible. One thing seems clear: The killer’s next target is a candidate for New York City mayor, one Theodore Roosevelt.

Convinced that something supernatural is afoot, Rose and Thomas must track down the murderer before Roosevelt is taken out of the race–permanently. But this killer is unlike any they’ve faced before, and hunting him down will take them from brownstones to ballrooms to Bowery saloons. Not quite comfortable anywhere, Rose must come to terms with her own changed place in society–and the fact that some would do anything to see her gone from it entirely.
Written By Carole Rae at 6:30 PM

I'm behind in my comments too. But yesss this sounds good!

I think I could enjoy this series.