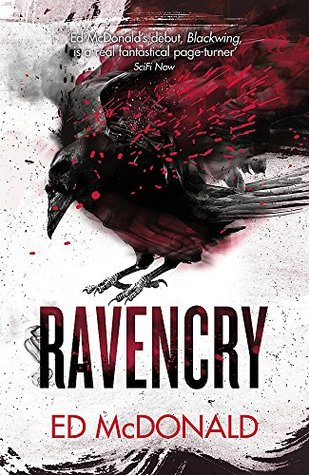 I have been having a bit of reader's block. I have wanted to read, but at the same time not. Not even with this good book. But tonight I buckled down and got it done!

Better make it short and start a new book while I have my groove back.

Ryhalt is a captain at the edge of a crappy place. He lost someone he cared for in the last book, and that person seems to be a ghost around town.

The city is going to hell.

His boss is on his case.

This is a grey, shitty place. I like it. Things happen here and well, I do fear for him in the next book. Nice series.

Four years have passed since Nall’s Engine drove the Deep Kings back across the Misery, but as they hurl fire from the sky, darker forces plots against the republic.

A new power is rising: a ghost in the light known only as the Bright Lady manifests in visions across the city, and the cult that worship her grasp for power even as the city burns around them.

When Crowfoot’s arcane vault is breached, an object of terrible power is stolen, and Galharrow and his Blackwings must once find out which of Valengrad’s enemies is responsible before they have a chance to use it.

To save Valengrad, Galharrow, Nenn and Tnota must venture to a darker, more twisted and more dangerous place than any they’ve walked before: the very heart of the Misery.

Aww fantasy, my one true love