Blodeuedd's Monday Review: When the Marquess Was Mine by Caroline Linden 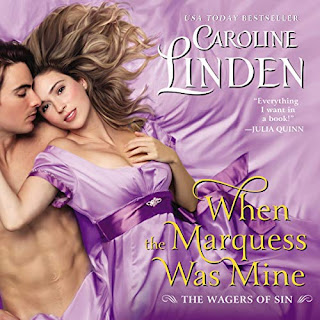 I am going to start in the middle, what an asshat her brother was!  Usually siblings are good, or aloof, but this was quite the asshat, and trust me asshat is just me saying it kindly. He need several kicks in his...

And back to the beginning, Georgiana is a nice, fun young lady, who is staying with a friend,when the friend's world comes crushing down.

Rob is your usual kind of rake, drinking and playing cards, and then he wins a house and sets out to claim it. I liked Rob, cos he was more than he was showing.

He is left for dead, she cares for him. To save him she pretends they are to be married. And he falls in love, awwww, I did like Rob. And Georgiana too, she was really  nice! And yes she was engaged to someone else, but fear not it works out! And in the end I even wanted that guy to find Miss Right too.

A nice romance that made me curious about the couples that came before.

Narration
A good narrator, and I think it might have been my first by her? But I would listen to her again. She did a good job with this romance and character realisation.

Georgiana Lucas despises the arrogant and cruel Marquess of Westmorland even before learning that he’s won the deed to her friend Kitty’s home in a card game. Still, Georgiana assures Kitty the marquess wouldn’t possibly come all the way to Derbyshire to throw them out - until he shows up, bloody and unconscious. Fearing that Kitty would rather see him die, Georgiana blurts out that he’s her fiancé. She’ll nurse the hateful man back to health and make him vow to leave and never return. The man who wakes up, though, is nothing like the heartless rogue Georgiana thought she knew....

You have to risk it all

He wakes up with no memory of being assaulted - or of who he is. The bewitching beauty tending him so devotedly calls him Rob and claims she’s his fiancée even as she avoids his touch. Though he can’t remember how he won her hand, he’s now determined to win her heart. But as his memory returns and the truth is revealed, Rob must decide if the game is up - or if he’ll take a chance on a love that defies all odds.
Written By Carole Rae at 6:30 PM

Email ThisBlogThis!Share to TwitterShare to FacebookShare to Pinterest
Labels: Audiobook review, B's Mondays, Blodeuedd, Caroline Linden, When the Marquess was mine

It's great to hear you had a good narrator

Mel,
I do love a good one

I'm loving that cover. So sweet and cute!

A wicked brother? Now, that is different. Glad you had a good time with this one.

I appreciate your work this is really helpful for everyone. Get more information at best card games for a group. Keep posting such useful information.