B's Monday Review: The Highlander Who Protected Me by Vanessa Kelly 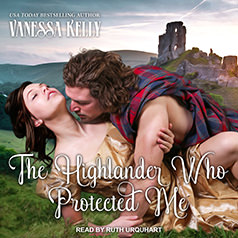 My Thoughts:
Royal is one of those wounded heroes. And with that I mean his leg aches from a war injury, a bad one. Who wants a second son with a limp?

Ainsley was, oh my, she was the sassy one. But she was also a spoiled darling of the ton. Still, she was a good clever woman with some tongue on her.

These two met in a previous series, where he tries to elope with her and she is all in your dreams! Which I never understood, but now I do.

Instead we get to see their first meeting and how he could never forget her. Then they meet again in Glasgow in that other series I mentioned. But this one really begins after that. He pining for her and she hiding a pregnancy! Whaat I thought? What happened? Because her family does not even know, so something must have happened and obviously nothing good. I did feel for her, poor woman. And she would have been blamed every time. It is always the woman's fault.

The book does take some time to get going. She gives him her baby because no one can know. The secret she is hiding is easy to know, but there is some other big secret too, but honestly that secret was not big and could have been dealt with. I also did not get why the father would have had any say. It was his words against hers, and Royal who said it was his kid. Oh well, drama and a baddie is always needed.

It could have been shorter. Maybe take away some of the dialogue. Shorter is always nice.

Conclusion:
A good book. A good baddie that you want to kick in the nuts. Two people that love each other, but take ages getting together. And one cute baby. I also liked that she was pregnant, you do not see that around a lot in regency books. It dealt with harsher things in life.

Narrator
I really like Ruth Urqhart. Her accent is wonderful. I have listened to a few of her books and they are a joy.

Full Synopsis
Lady Ainsley Matthews, heiress and darling of the ton, was expected to make a magnificent match. Instead she's hiding on a remote Scottish estate, terrified that her vicious former fiancé will use her pregnancy to force her into marriage. One man can help her—Royal Kendrick, son of a distinguished Highland clan. Though a mistake drove them apart long ago, Royal is the only person Ainsley trusts to protect her baby—even if that means agreeing to never see either of them again . . .

Scarred in body and soul by war, Royal suddenly has a purpose—caring for an innocent babe and thereby helping the woman he can't stop loving. But when Ainsley ultimately returns to Scotland, determined to be a real mother to her child in spite of the risk, there's only one solution: marriage. And only one likely outcome: surrendering to the desire that's simmered between them for so long, no matter how dangerous it may be . . .

Email ThisBlogThis!Share to TwitterShare to FacebookShare to Pinterest
Labels: B's Mondays, Blodeuedd, Books and Reviews, The Highlander Who Protected Me, Vanessa Kelly

Sassy and then a good baddie? Love it

LOL, yes, sometimes those 'big secrets' just don't see impressive after reading them hem-haw about it for half the book. Glad the villain was hateful and the couple and baby were fun.
I like Ruth's narration work, too.

It's been a while since I haven't read a Highland story. And a baby? Oh I'm curious

Sophia,
She is so good :D
but yes so often the secret is so come one! WHy hide it? The truth will always come out anyway

Mel
Omg, it should have been called that! A highlander and a baby, lol