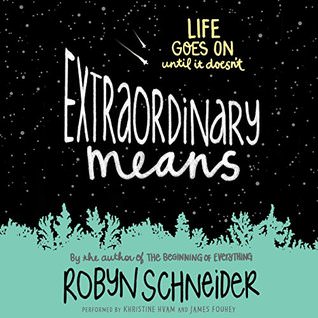 Audiobook, 8h
Published May 26th 2015 by Katherine Tegen Books
YA Fiction
Own


My Thoughts
I wish books weren't compared to other books. Because when they did compare this one to a book it became obvious how it would end.

Short, must make it short!

Lane has drug resistent TB and is sent to a sanitarium. He was the kid on the honor roll and who did nothing else but study. And he has a hard time shaking it.

He meets real friends for once.

1 out of 5 sent there do not make it home

Spoiler where I talk about how idiotic they are
Wtf. Sneaking into town! They might infect someone!
Taking of their sensors! Those will help if you die! Stupid effing idiots.

Conclusion:
I liked it. Lane learned that there is more to life. He falls in love and he hopes.

They were both good but I had this problem. Khristine talked too fast and James too slow. It was hard to find a speed that worked for both. And then I still felt he was too slow.

Blurb:
Up until his diagnosis, Lane lived a fairly predictable life. But when he finds himself at a tuberculosis sanatorium called Latham House, he discovers an insular world with paradoxical rules, med sensors, and an eccentric yet utterly compelling confidante named Sadie—and life as Lane knows it will never be the same.
Written By Carole Rae at 6:30 PM

Oh good my spoiler is still a spoiler