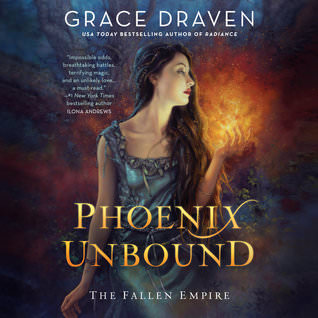 
My Thoughts:
I'd say that the best part was the last 3 hours. Then it got really exciting, and there was death, war and destruction. All the good things in life. Ohhh good stuff, good stuff! Yes there the book was great, but the other 11 hours were good. And hey, good is good! Good means I will read more and so on. But after having listened to those last 3 hours, then I do wish the rest of the book could have been that great.

Gilene's village are a bunch of d#cks! I get it, I mean you do save others! But they should like worship the ground you walk on then the rest of the year. Why she had any loyalty to them *grinds teeth*

The Empire was a nasty bunch of people. The Empress needs to be beaten with her own entrails. What a sick piece of dung she was. It's not said but I sure wondered how many women were killed every year. Innocent women burnt. Death to the Empire!

Then there was Azarion. The things he has gone through these last 10 years! Poor man. Now wonder he lusts for vengeance. I say, go for it! Make that person pay!

SO yes. He takes her away because she is his only chance for freedom (not counting death). Obviously they will fall in love, but it takes time, which is understandable. He does kidnap her so he can reclaim his birthright. And she is all, but I must return to my village so I can be burnt and raped again next year! Oh girl, you need to stop protecting those dang villagers!

I must say, I did not exactly feel the romance. I only felt it on the last page. There I understood that they loved each other. I guess I would have wanted a bit more...before.

It was a good book. And when it ended I checked news for the next one at once, but arghhh, no blurb! I want to know if the next book is about them or someone else!!!!!

Narrator Katherine McEwan
She did a good job, though I felt she sounded a bit too young. She would be a good fit for YA fantasy, but when you speak of rape and torture, well, then maybe a bit more mature. Still, excellent job,

A woman with power over fire and illusion and an enslaved son of a chieftain battle a corrupt empire in this powerful and deeply emotional romantic fantasy from the USA Today bestselling author of Radiance.

Every year, each village is required to send a young woman to the Empire's capital--her fate to be burned alive for the entertainment of the masses. For the last five years, one small village's tithe has been the same woman. Gilene's sacrifice protects all the other young women of her village, and her secret to staying alive lies with the magic only she possesses.

But this year is different.

Azarion, the Empire's most famous gladiator, has somehow seen through her illusion--and is set on blackmailing Gilene into using her abilities to help him escape his life of slavery. Unknown to Gilene, he also wants to reclaim the birthright of his clan.

To protect her family and village, she will abandon everything to return to the Empire--and burn once more.
Written By Carole Rae at 6:30 PM

Ha, I had already forgotten which review I had sent you

I had a good time with this one!

Mel
I hope the enxt one is good too!