Blodeuedd's Monday Review - The Arrows of the Heart by Jeffe Kennedy 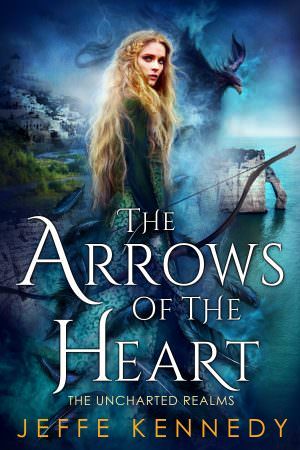 This series is my favorite Kennedy series. I know I know, yes an author can have different voices, and she so has! Lately I have read one set in the same world, but before The Twelve Kingdoms, and that is not a romance one, but fantasy. And the voice is a whole other authors. Then there was this fantasy romance set in yet another world, and again, totally different voice. But hey, that is why she is the author! But my heart belongs to the first trilogy, and the this new series. This is my favorite voice.

Ok so when I am done rambling about that...

Karyn was married, she was told she had to be a virgin for the rest of her life. Then her husband fell in love and said they could divorce so that he could leave that stinking kingdom behind. But, what about her!? She is not prepared for this world. She was raised to be a princess. She knows nothing else. She tries to become a fighter since Jepp showed her some moves (Jepp who fell in love with her husband who was not allowed to touch her omg just read the previous books.) But Karyn is not really a fighter. And she wants more from life. Sure, being a princess could have been nice. But she would never have been allowed to be a mother. And now she is with the Tala...

Zyr is, oh he is a bit too much, but then he is Tala! They are flirty, they do not care about silly things, sex is not big deal and they are free. Though, now when I start to think about it, that is not the best thing. I mean if you are not sure who your baby daddy is then what stops your kid falling for his half sister! I mean they are inbred enough already. These people need some new boundaries and to start writing down who fathered who. Anyhow, he is a good guy. He is just...a surfer dude! Ha, but yes, I could see that. Carefree, loving and kind.

And he sure flirts with her and tries to get under her skin, and clothes. And she might just need it so that she can learn that women are not tools, women have a voice too. They can be strong on their own (and fall in love too.)

But before the love falling part, they will banterm become closer and fight monsters as they set out on an adventure. And dang! Now I want to know what happens in the next book!? Who is the next book about?

Karyn af Hardie is on her own, for the first time in her life. While all around her brace for war with Karyn’s former homeland, the Empire of Dasnaria, all Karyn really wants is to find a husband who will care for her. After all, she gave up everything for the chance at a normal family life with love and children. She has no way of supporting herself and the only thing of value she has to offer is her virginity. The last thing she’ll do is squander that on the flirtatious shapeshifter Zyr.

Zyr is fascinated by the golden-haired and exotic Karyn—but not enough to put up with all of her mossback rules. She’d be considerably happier, in his opinion for some good bouts of healthy sex. Still, that’s not his problem and he has plenty that is. His sister Zynda has disappeared, possibly never to return, leaving him with a mission to use the mysterious map-sticks to find ancient n’Andana and recruit help for a war they seem doomed to lose to otherwise.

Suspected as a Dasnarian spy, Karyn can’t stay in Annfwn while the defense is planned—so she’s sent with Zyr to assist on his desperate quest. If they can keep from killing each other, Karyn and Zyr might just discover they hold more than a map to saving the world.

Email ThisBlogThis!Share to TwitterShare to FacebookShare to Pinterest
Labels: B's Mondays, Blodeuedd, Books and Reviews, Jeffe Kennedy, The Arrows of the Heart

I'm in love with this cover

So am I Melliane!!