Hello everyone! This month Blodeuedd and I are reviewing, Darkest Hour.

Blodeuedd is in blue and I am in purple. 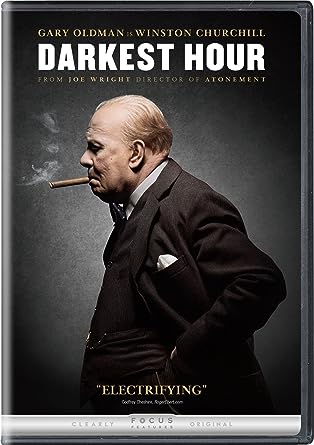 
During the early days of World War II, the fate of Western Europe hangs on the newly-appointed British Prime Minister Winston Churchill, who must decide whether to negotiate with Adolf Hitler, or fight on against incredible odds.

My turn to pick a movie and, eh, maybe not the best pick. Not a lot to discuss, but I am sure we can find things! :) I honestly thought it was pretty good. NOT amazing, but pretty good. I can agree with that. It was good, but not amazing. But things to discuss! Eeek. Ok Gary Oldman! Damn. I did not even see it. You stole the words out of my mouth. I had that on my notes of what I wanted to talk about. Haha YES. Holy cow. He did wonderful in acting and in costume. You can’t even tell it is him. Fantastic. He seriously was Churchill! I still can’t see it even though I know it is him. It was amazing. Down to the not really understanding everything he was saying ;) He deserved an award for this role. Agreed. He had Churchill (or what I know of the man) down to a T. I think he was nominated for an Oscar...but I do not think he won. Who won….no idea! But Oldman should have. He really made the movie, but then the entire movie was about him so he better bring his A game. *does research* Oh! I think he did win! Good! He really deserved it in this film. *nods* Lol. SO went all why are you laughing??, but I had to laugh at that. Oh we know so little. But yes good! He so deserved it for this role. I used to be on top of that! But the last few years? Naw. Too lazy. That is what Google is for. Now! What did you think of the others? I liked his typist and his wife. They were fun. I always enjoy his wife. She is so funny! The typist was in Downton Abbey? Lily? Right? I liked her there if that was here and yes I liked her, but she did not really do much. I wish we had seen more of the wife, she sounded fun! From anything I see with Churchill and his wife, she doesn’t take his crap. I do wish we got more time with her. She is the only one who can truly handle that man. I think we need a movie from her POV! Bring it! :) Yesss! My next point. Why is everything about Churchill in the middle of the war? Yes, yes, he saved England and all, but I really want to watch something about young Churchill and his wife. I want to see them fall in love, get married, and watch them grow together. That would be fun. We can always start with his mother too to get the entire story. And yes it would be fun to see that. I have NO idea what Churchill did before the war. I mean, was he in WW1? He must have, I think. So much I do not know. Mhmmm I think he was? They mentioned, briefly, a mission he messed up. I wanted more info on that. I should google search one day. But yes, I want to learn more about the young man and his wife. I googled. He was involved with Gallipoli, and that was one big mess! Must have messed things up for years for him. So he resigned as an MP and joined the war in 1916 and went to the front. See, already interesting things we learn. Ah yes, I remember that name. They threw that in his face a few times. No details tho. Sighs. SO MUCH MATERIAL THEY COULD DO! So we have reached the conclusion the world needs more Churchill, lol. As for this one, I did not learn anything new. But it was interesting watching it from this side. When I watched Dunkirk everything was on that beach and the sea. Yes, it was interesting to see on this side. It frustrates me, because they wanted to make peace with the monster. NO. Insanity at that point. I did read a book that goes off and does a what-if Churchill caved and decided to make peace. A messed up world indeed. It was all of Europe vs America and Canada. But yes, I did enjoy seeing behind the scenes. Politicians are so crappy. Interesting. I like what ifs. But there would still be Russia. But maybe the Nazis took over? See, I am more interested in that book now. I have read a what if where Germany one and it was bleak, so bleak. Yes, the book was good. I can’t remember Russia. Maybe they kept to themselves...lol been so long. I wished they would’ve cut a little bit and showed more of the aftermaths and more time with him dealing with craziness of war. It was a short time for sure. But they ended on top so to say and that is what they wanted. Not a war that drags out. So do we have anything more to say? Oh oh, I liked when he talked to the people on the subway, that was fun. OMG that scene made me tear up. I’m such a baby. But such loyalty and love is amazing. I cheered. Beautiful scene.

I kept waiting for him to make his speech too, but it was not as good as the subway, cos that was real. I loved the speech he made right before the “big” one. That one was good. He was good at that ;) A real politician. We need another Churchill to wipe this world into shape. LOLLL The man was awesome. Scary, I can imagine, but he was good. I chuckled when the King was all honest with him, “Errr...you are kinda scary you know?” haha I like King George (it was him right? ;) He was real and not meant to be king so I guess that is why. Yes, he was lovely. The actor did well. I honestly didn’t know the two had beef at first. I had no idea Churchill supported the old King wanting to marry his American. So one fact I did not know! THey should have been able to marry and for him to be king, but then again, he seemed to have been nazi oriented so...go George Yes, it all worked out well. I liked George more. His brother was skeevy especially when those photos got out with him being all friendly with the Nazi Lord, Hitler. So England AND the world dodged a bullet. He would’ve SO not supported Churchill in wanting to fight back. Dodged a bullet there for sure. Anything more to add? Mhmmm no. I think that is it. Pretty good. The film was a little dry here and there. I want to see more Churchill movies and shows in the future featuring his young life. You? I agree with a bit dry in places. Still good and interesting, and yes we need young Churchill - the BBC mini series! ;) That would be fine with me. LOLL!!! The end! :=) The end! Back to work for meeeee


**Carole's Conclusion**
This was a good watch. It was nice seeing more of a different POV during the early stages of the war. The ones that wanted peace deserved a smack! The acting was fantastic! Especially Oldman. There were dry parts and it did drag a bit. A good watch. I'll give it 3 stars.

it was one I was wondering about

I haven't watched this one yet.

Melliane, it is a good one.