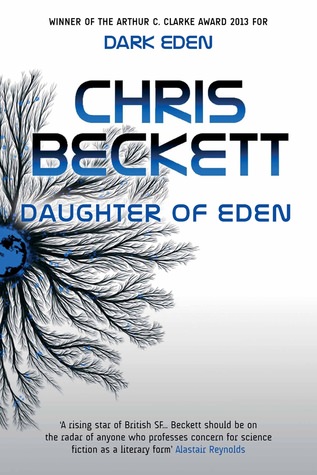 Angie Redlantern is the first to spot the boats—five abreast with men in metal masks and spears standing proud, ready for the fight to come. As the people of New Earth declare war on the people of Mainground, a dangerous era has dawned for Eden. After generations of division and disagreement, the two populations of Eden have finally broken their tentative peace, giving way to bloodshed and slaughter. Angie must flee with her family across the pitch black of Snowy Dark to the place where it all started, the stone circle where the people from Earth first landed, where the story of Gela—the mother of them all—began. It is there that Angie witnesses the most extraordinary event, one that will change the history of Eden forever. It will alter their future and re-shape their past. It is both a beginning and an ending. It is the true story of Eden.

My thoughts:
This world is so effed up, omg, soooo effed up. But when I am there in the moment I do not see how effed up it is, I just see people struggling to make a living.

Book 1 was amazing, the other two did not live up to amazing, but they are still good. I guess it can only hit you as many times how effed up it is.

The book takes place in the present and a bit in the past (I did prefer the present bit and did want it to be all about that.) In the past we see Angie Redlantern follow a woman, a shadow speaker. They go around and preach the word of Mother Gela.

In the present Angie and her family has to flee as war has come to their planet. The Johnsfolk and Davidsfolk clash (because they are all freaking idiots.) And then visitors from earth comes.

And it hits me, damn, this is effed up! Until that I was in the moment, but then I saw it with the eyes of the astronauts.  They come to find the remains of a woman and man. Stranded on an alien planet 400 years ago. Instead they find people running around in animal skins and fighting with spears. And all these people come from 1 woman and 1 man. Yeah...gross. Many have mutations, facial and feet. Those are then lesser than the rest. They are inbred and indoctrinated.

This was one freaky series. Dark inbred science fiction.
Written By Carole Rae at 6:00 PM

You keep finding books with effed up worlds!

It looks different and weird

Interesting :p But I've read the first part so thanks but no, thanks...