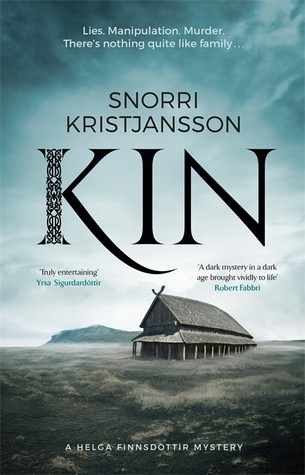 He can deny it all he likes, but everyone knows Viking warlord Unnthor Reginsson brought home a great chest of gold when he retired from the longboats and settled down with Hildigunnur in a remote valley. Now, in the summer of 970, adopted daughter Helga is awaiting the arrival of her unknown siblings: dark, dangerous Karl, lithe, clever Jorunn, gentle Aslak, henpecked by his shrewish wife, and the giant Bjorn, made bitter by Volund, his idiot son.

And they're coming with darkness in their hearts.

The siblings gather, bad blood simmers and old feuds resurface as Unnthor's heirs make their moves on the old man's treasure - until one morning Helga is awakened by screams. Blood has been shed: kin has been slain.

No one confesses, but all the clues point to one person - who cannot possibly be the murderer, at least in Helga's eyes. But if she's going to save the innocent from the axe and prevent more bloodshed, she's got to solve the mystery - fast . . .

My thoughts:
It has been a very long time since I finished a book in a day. Not that I have not wanted to. But a baby makes it harder. But today everything came together, and it also helped that I could not put the book down and that it was so light and it flowed so well. Suddenly I was on page 150 and it felt like a blink of an eye. Who knew Viking crime drama could feel so light! In writing that it. In tone, eh, not so much. There will be blood as kin slay kin. Though dark it is not.

Helga is our heroine and she was awesome. She is the adoptive daughter in the house. Calm, patient and with a good eye for things. As she will soon learn.

Her foster parents have 3 sons and 1 daughter. And they all gather now. They all believe their father have hid a Viking treasure somewhere. They all have their own hidden agendas. This is a very dysfunctional family. Helga seems to be the only normal one.

Obviously there will be blood, and Helga is on the case.

Oh it was just so good! I truly enjoyed this one. Writing that just flows. And a murder I could not figure out (but then I never can.)

Cover
Can I say amazing!
Written By Carole Rae at 6:00 PM