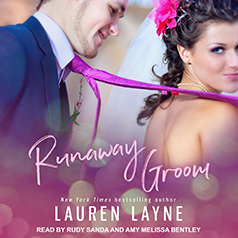 Gage Barrett’s reputation as a ladies’ man has been greatly exaggerated, but none of that matters after a drunken bet lands him on Jilted, a reality TV show that matches runaway grooms with wannabe brides. Now he’s stuck at a Hawaiian resort with nineteen women competing to drag him back to the altar—and one contestant who’s even more miserable than he is. Gage has no idea how feisty, independent Ellie Wright wound up in the cast, but it’s obvious she hates his guts. And if there’s one thing Gage likes, it’s a challenge. . . .

Ellie can’t believe she let her best friend talk her into exchanging her dignity for a glorified bikini contest. Still, she could use the exposure—her business is struggling—and she’ll probably be one of the first to get eliminated anyway. But Gage isn’t the shallow jerk Ellie anticipated—and he’s in no rush to send her home. As stolen kisses turn into secret trysts, she finds herself losing track of what’s real and what’s for the camera. With the wedding finale looming, this runaway groom is tempting Ellie to start believing in storybook endings.

My thoughts:
Just like book 1 things are not what they seem. Sure, Gage left women at the altar, but there are reason. And those things he wanted at the end, awww, my heart broke.

Gage lost a bet and is now the star of Jilted. He is also a famous movie star. A LOT of women want to be on Jilted for a chance to marry him. And sure, I liked how he did not just leave (cos he sure did not like the idea of this show), he did not want to be that guy who always leaves.

Ellie is so not like the other contestants, and is doing this for the free PR for her company. She is honest, does not give a fig, and is just so normal you know.

He finds her refreshing.
She likes him when she sees the real him.
But this is a reality show! Who wants that! Not her.

I mouthed OMG as I listened and walk and put on my silly grin. SO many times. I  should find a new way to rate audiobooks, because I find myself more and more wanting to rate them differently. The narration was so splendid, and as always, I just know I enjoyed this so much more than I would have reading it.

Totally cute, Totally fun. A joy listening to. You know it's good when there is 1 h left and I just haaaave to finish it.

Amy Melissa Bentley and Rudy Sandas
Alternating POVS.
I found myself thinking in her voice. LOL. She got me.
I also like his voice a lot, he was Gage.