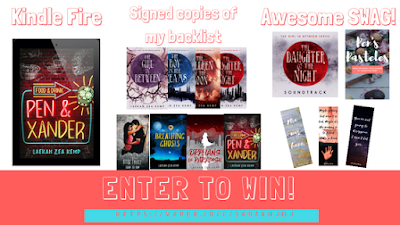 Here is the link directly to the giveaway:


And courtesy of the author is here are a couple of excerpts of 'Pen & Xander' for your enjoyment!

Excerpt #1:
The parking lot hasn’t changed; the science building looks the same as that first day of school five months ago. But as I sit in my car, watching girls I met during orientation skip up the steps, hugging their bags, excited to play nurse, I try to convince myself that something inside me has. That today I’ll actually be able to go inside. That today I will stop lying and be the person they want me to be.

Class starts in approximately seven minutes—the class I should have taken and passed last semester, moving me one step closer to a degree in nursing.

I sit in the parking lot, watching the clock tick down. The car is in park but I can’t bring myself to turn off the engine.

I turn off the car, reminding myself how much I’ve already wasted on tuition and books.

You can do this. You can.

I reach for my bag.

And then I can’t breathe.

All I can think about are my mother’s shoes.

How they’ve sat in the same spot by the door for almost twenty years. Scuffed and cracked, the shadow of her foot pressed to the leather even when the laces are loose. I imagine every hallway they’ve ever walked down, every door they’ve propped open, every mess they’ve ever stepped in, every second they’ve held her up when all she wanted was to collapse. Because one of her patients couldn’t remember her face or their daughter’s name or how to speak.

When she lost one I’d wake to the knock of the rolling pin and the smell of dough warming on the hot plate. Sometimes I’d try to take the pin from her but there was something about the force, about the rhythm that reminded her how to breathe. We’d work in silence and three-dozen tortillas later she’d wrap them in foil and drive them to the family. The family that only visited once a month. That would accept my mother’s food without acknowledging that she was more family to the deceased than they were.

And then the next day she would go back to work.

For almost twenty years. She went back.

And if I step out of this car, if I walk up those steps, if I sit at that desk and pretend…how long will I be sitting there before I realize I’m trapped?

I take a deep breath, the scent of a thousand shifts at the restaurant tucked into the fabric of the front seat. Mango and cilantro and epazote, tomatillos and roasted pepitas and tortillas. I can’t sleep without those smells tangled in my hair, without those flavors still on my tongue.

So I have to decide what’s scarier: living a life that doesn’t belong to me or losing the one I love. If the truth breaks my father’s heart, I know he’ll take it from me. But if it doesn’t, if he understands, if I can makehim understand, I can be free.

I weigh each option, simmering in the anxiety they provoke, in the hope. Because I have to do what scares me. It’s the only way to ward off the helplessness. To stay in control. I always have to be in control.

Which means that today is not the day I go inside.

My stomach drops, my hand reaching to put the car in drive again.

Today is the day I tell them the truth.


The room empties until there’s no one left but a few people snoring. Pen stays put too, standing across from me. Her cheeks are flushed from the alcohol, her expression stoic.
“Should we call it a tie?” I say.
She slides a shot glass over to me. “There’s no such thing.”
“Okay…” I reach for the coin. “Call it.”
She calls heads. She wins.
I try to steady my voice. “Go easy on me.”
“Truth or dare.”
“Truth.” It’s the only game I want to play with her.
“Okay. Where are you from? Originally?”
I sigh, relieved. “Puebla. I moved here when I was twelve.”
“My turn,” she says, not wasting any time.
“Truth or Dare,” I counter.
“Truth.”
The question immediately forms on my tongue—who are you…really?—but it’s too harsh, almost accusatory. I mull over the words again and finally settle on, “Are you really as brave as you seem?”
She doesn’t smile. “Yes. And no. Your turn.”
“Truth,” I say.
“Are you as cool, calm, and collected as you seem?”
I huff out a laugh. “Sometimes.”
“And other times?”
The laugh slips from my lips. “I’m a fucking mess.”
“My turn.” I can’t tell if the abrupt back and forth is driven by her desire to reveal something about me or to be revealed herself. “Ask me another question.”
“Why did you drink before they could say who your brother…you know…?”
Pen glances at the window seat where Chloe is asleep against the sill. She rolls, sensing our eyes, and Pen lures me onto the front porch. The breeze is warm, the night sky hidden behind grey clouds. I expect Pen to explain but instead she’s silent, proving once again that Chloe’s secrets, unlike everyone else’s, are safe with her.
Beneath the light whistle of the wind, crickets chirping, I say, “You’re a good friend.”
She ignores the comment, sitting on the lid of an old paint can. “It’s your turn.”
I sit down next to her. “I’m ready.”
She narrows her eyes. “Okay, for all the marbles this one’s a two-parter. One truth and one dare.” She stares at the street, cheeks burning.
When she faces me again mine are too.
“Truth,” she breathes. “Do you want to kiss me?”
I don’t look away or even blink. “Yes.”
She doesn’t look away either. “Dare.” She swallows, leans in. “Do it.”
My hands move first, trusting that the only way to make them stop shaking is to press them to her skin. My thumbs graze her cheeks, fingers in her hair. It’s soft and she’s warm and for a long time I just look at her, closing the space centimeters at a time while I take in the lashes that are stuck together by mascara, the birthmark buried under her left eyebrow, the small dimple on her chin. I stare, sorting every piece into things that feel good and things that hurt like hell, into things I never want to forget and things I’ll do whatever it takes to make sure I never have to.
But before I have a chance to savor those first few breaths slipping between her lips, they’re pressed against mine, falling and climbing their way back up. I taste her lipstick, her tongue, and it makes me dizzy. Her hands are on my knees, pinning me there, and then they’re on my waist, on my shoulders, both of us gripping each other like we’re clinging to the edge of a cliff. Afraid of falling off. Or hoping that if we do, we’ll fall together.
Suddenly, Pen stops moving.
She stops breathing, my wild heartbeat the only sound.
I open my eyes and she’s not staring back. She’s staring at the street. At the car parked in front of Angel’s house, cigarette smoke slithering up from the open window, flesh and ink viper flexed against Jago’s forearm as he hangs it over the side of the door.
I’m on my feet and so is Pen. She shudders, angry, and unafraid. But I’m terrified. And not just of Jago seeing me here but of Jago seeing her. I don’t know how long he’s been watching us but I can tell by the way his mouth twitches that he knows who she is. To Ignacio Prado. To me.
The engine purrs as the car pulls forward. Just in time for Angel to step outside. For Jago to say hello to him too.
“Get inside, Pen.”
She straightens, shoulders heaving.
“Pen…”
“No.” Her stare sharpens. She charges down the steps. “He’s not gonna fucking do this.”
Angel wrenches her back. “Are you out of your mind?”
My heart races.
“Stay away from us!” Pen shouts, trying to tear herself from Angel’s grasp. “Stay away from the restaurant. Fucking stay away!”
She seethes but the faster her breaths, the more transparent she becomes. Beneath the anger, beneath the shock, her eyes glisten with something like fear. And it’s all my fault.
Jago hangs his head back, a whistle cutting between his smile. He leans on the gas, letting the engine growl, and then he speeds off.
Pen glares until he rounds the corner and then she finally lets Chloe pull her inside. I stay put, afraid of facing Angel. I know Jago’s been following me and because I wasn’t being careful I led him right to Angel Prado’s house. To Pen. Her rage wasn’t directed at me but what she doesn’t know is that it should have been.
“I’m sorry, Angel. I didn’t mean for—”
“It’s not you,” Angel stops me. “It’s…” he shakes his head, “it’s not you.”

I do remember you loving it

B, it was super good!