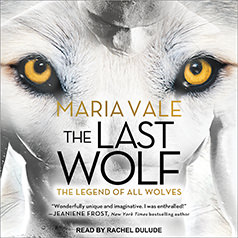 For three days out of thirty, when the moon is full and her law is iron, the Great North Pack must be wild.

If she returns to her Pack, the stranger will die.
But if she stays…

Silver Nilsdottir is at the bottom of her Pack’s social order, with little chance for a decent mate and a better life. Until the day a stranger stumbles into their territory, wounded and beaten, and Silver decides to risk everything on Tiberius Leveraux. But Tiberius isn’t all he seems, and in the fragile balance of the Pack and wild, he may tip the destiny of all wolves…

My thoughts:
I really have fallen in love with audio and that is why I wanted to give pnr another go, though I feel this was more UF in this. It was just, dunno, darker.

Silver is the runt of the pack. At the bottom, hopping around on 3 legs, and no mate. She was also more wolf than human. She did not like to be in skin, and it did make it a bit funny at times when she tried. She was nice and she was a wolf.

Tiberius shows up and asks for mercy and she is the only one that can save him. Because then she might earn a real place. But he is a shapeshifter, and they are bad. They always turn on wolves and kill them. But he really seems to want to work for it. And I liked seeing him trying to be a wolf cos here it was he who was bad at it.

He must learn to be a wolf so that the pack will accept him. There are troubles outside the gates. And Silver must think of her own future if they fail being accepted as a couple. So there is passion (obviously), danger and so many wolves.

I really liked how wolfish these people were. In other books they might be wolves but here they really were wolves. Pack was pack. Pack raises pups, pups runs around as wolves. Everything from mating (with a big M), to eating. Really wolfish. It made it different.

Conclusion:
I enjoyed it. I wonder if the next one is about them also, or another couple.

Narrator
Rachel Dulude
I liked how she narrated this and I felt she got Silver right. It made for a fast pleasant listen. And like always, def listen to it.
Written By Carole Rae at 6:00 PM

I think it's the first time I hear about this one

I NEED SOME WOLVES IN MY LIFE