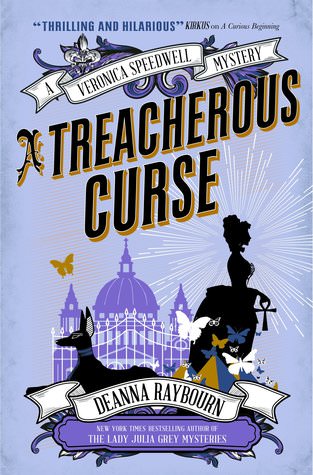 London, 1888. As colorful and unfettered as the butterflies she collects, Victorian adventuress Veronica Speedwell can’t resist the allure of an exotic mystery—particularly one involving her enigmatic colleague, Stoker. His former expedition partner has vanished from an archaeological dig with a priceless diadem unearthed from the newly discovered tomb of an Egyptian princess. This disappearance is just the latest in a string of unfortunate events that have plagued the controversial expedition, and rumors abound that the curse of the vengeful princess has been unleashed as the shadowy figure of Anubis himself stalks the streets of London.

But the perils of an ancient curse are not the only challenges Veronica must face as sordid details and malevolent enemies emerge from Stoker’s past. Caught in a tangle of conspiracies and threats—and thrust into the public eye by an enterprising new foe—Veronica must separate facts from fantasy to unravel a web of duplicity that threatens to cost Stoker everything. . . .

My thoughts:
Veronica is a hoot! LOL. It opens with her unboxing things for their collection and then she and Stoker has a discussion about the phallus  she finds. She is so NOT a proper Victorian lady. While Stoke is SO the proper gentleman who blushes as such things.

So yes Veronica is not your average kind of woman. She collects butterflies, has written about them and been published, been around the world, and slept with men and is not afraid to talk about it.

Stoker is more proper. Raised an aristocrat and been around the world too. But he sure needs her to drag him out of the hole he is in.

Together they solve crimes and are unstoppable!

This time there is a Mummy curse, a missing artifact, and one gentleman gone missing. On to the mission they are. And then there is that thing about her ancestry which makes certain people look after her more carefully. I like that.

They are so great together (hook up!). There is silliness and seriousness. Oh this would make such a fun tv series (looking at you BBC).