Movie Review: Fantastic Beasts and Where to Find Them (2016) 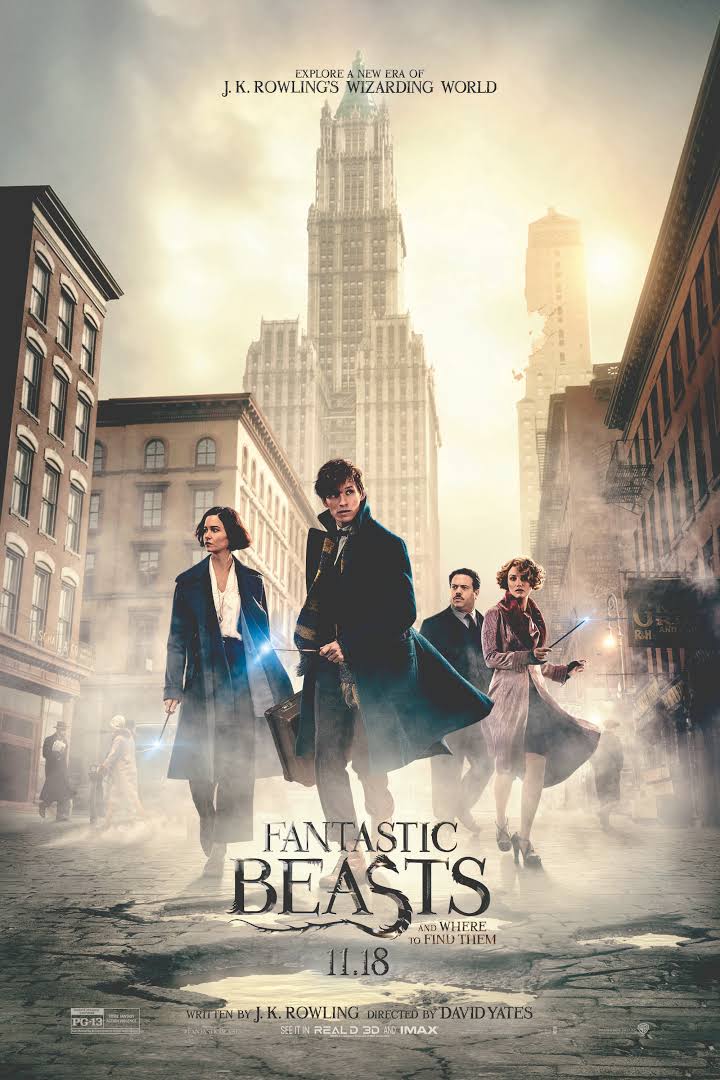 Film Title: Fantastic Beasts and Where to Find Them
Length: 2 hr & 13 min
Released: 2016
Genre: Action/Adventure & Fantasy
Rating: PG-13
Where I Got It: Seen at theaters

SUMMARY:
The year is 1926, and Newt Scamander has just completed a global excursion to find and document an extraordinary array of magical creatures. Arriving in New York for a brief stopover, he might have come and gone without incident, were it not for a No-Maj (American for Muggle) named Jacob, a misplaced magical case, and the escape of some of Newt's fantastic beasts, which could spell trouble for both the wizarding and No-Maj worlds.

Oh the wizarding world of Harry Potter! Such a place! Now, this movie does not fall Harry. This takes place early on and follows Newt and all his little beasties. He is studying them and trying to preserve them from the nasty wizards and witches who do not understand them. Sighs…even though they think they are better than humans they most certainly are not. People suck.

Newt has gone to America at the worst time imaginable. There has been such nonsense and destruction happening around New Year. The wizards are blaming creatures because why not? Easy targets. Maybe a little bit of investigation would show that these things are happening from a wizard and/or witch. SMH.

I feel with each story JK’s world is getting darker and darker and darker. Even though this takes place WAY before Harry, the world is VERY dark. There was a scene that made me really wonder if this is truly meant for kids. I, personally, adore the darkness…but I feel this is a little too dark for the wee ones.

The effects were great. I lovvvvvvvvvvvvvvvvvvvved the creatures. They were done well. I also loved Newt. The actor is a hit-or-miss for me, but I feel he did well. It is the perfect role for him. Slightly awkward and nerdy. I do wish he would branch out a bit more.

The other characters were interesting and they all did well. My only issue was the main baddie. They showcased him a bit in the beginning and they never mentioned him again until the end. I forgot he was even a main player in the story. With the reveal at the end (no spoiler there folks), I had to explain to BF who that person was and whatnot. I wish they would have brought the main baddie’s name up and showed the face once or twice throughout the film to remind the viewer that the baddie is a thing. However, the ending was fantastic. Super good and had me on the edge of my seat.

I am curious what is up next for Newt and his beasts.

I had a love-hate relationship with the love interests in the movie. I wasn’t a super fan of Newt-Tina. It might have been because I didn’t feel any of the chemistry between the actress and actor. However, I did love Queenie and Jacob. They were cute. Queenie was a bit annoying at times, but I liked her. I am glad that the romances and love interests didn’t take away from the story. There was a good balance there. However, I do wish that there was more chemistry between Newt and Tina.

Overall, this was pretty good. It was a nice beginning and I am excited to see what they have in store for us next. There were a few things that bugged me especially the whole baddie thing. They really needed to remind the viewers of the baddie’s presence. Even I forgot about the baddie’s role until the end. The effects and costumes were lovely.  The beasts were my favorite. I wanted to see more of them. Out of five stars, I’ll give this a 3. It would’ve been higher, but I think the script needs some fine-tuning.

Email ThisBlogThis!Share to TwitterShare to FacebookShare to Pinterest
Labels: 1900s, 1920s, 20th century, 3 stars, action, adventure, Fantastic Beasts and Where to Find Them, Her Secret Fantasy, Movie of the Week, Movies and Reviews, USA

When it comes out on dvd, yes