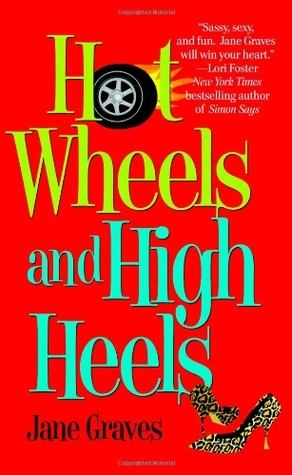 Trophy wife Darcy McDaniel has just discovered that, thanks to her embezzling husband, her posh, upper-class life is gone for good. Now she's trading her suburban palace for a trailer park and her weekly salon appointments for a job. Darcy needs a new man--fast--one who'll keep her in the manner she darn well deserves. Problem is, the hottest prospect around is the my-way-or-the-highway hunk who's making off with her beloved Mercedes!
Ex-cop turned repo man John Stark is sure that hiring the furious blonde in his headlights is a colossal mistake. He knows Darcy's high-maintenance, designer-labels-only type--after all, he's used to taking their cars. But he never expected this hellion to have the smarts and the spunk to go from receptionist to repo agent in record time...or to drive him insane with desire. She's the last thing this tall, dark, and dangerous loner needs...and everything he never knew he wanted.

My thoughts:
Darcy, hmmm, she was such a trophy wife. But then again she did learn a few things early on, and I did start to like her even with her flaws. I also liked that the author made her 40! I know, so freaking old ;) But comparing to other heroines it felt refreshing.

John was nice, the only issues he had was with a certain headstrong trophy wife. But who wouldn't.

They meet, there is anger, she gets a job, there is drama. And oh those sparks fly.

There is also...something else, I never really got that, but sure why not. A good chase.

Conclusion:
I actually read it in a day, it was just so light and fun