Blodeuedd's Monday Review: Caught in the Act by Jill Sorenson 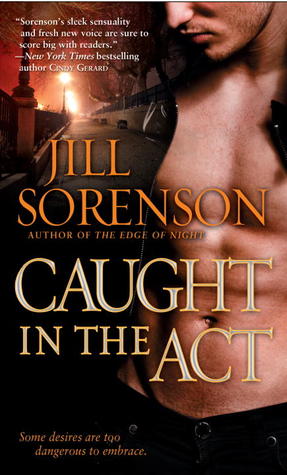 As the owner of a flourishing Latin American crafts boutique, Karina Strauss should be basking in her success. Instead she’s worried about her troubled sister, the girlfriend—and prisoner—of drug lord Carlos Moreno. Kari wants no part of that life, but when she helps a friend cross into the United States illegally, two men on opposite sides of the law take notice: Moreno and Adam Cortez, the handsome border protection officer who lets Kari off the hook. It’s not just Kari’s tantalizing flash of skin that catches Adam’s attention—her drug cartel connections bring back the demons of his past.
her success.

Moreno demands that Kari smuggle a package for him in exchange for her sister’s freedom. Adam also gets dangerously close, tempting her to surrender and fulfill her wildest desires. As Kari prepares for the drug run, dark secrets, violent criminals, and deadly consequences lurk around every corner. But concern for her sister drives Kari toward a terrifying act, despite Adam’s warnings, despite her overwhelming fears—and despite the odds against coming out alive.

My thoughts:
It was light (well in that that it was easy and fast to read). It was not light in other ways, ya know, violence, drama and passion.

Kari was, well pretty stupid, she smuggles someone across the border. She agrees to smuggle drugs, yes yes I get that she wanted to save her sister. Who was happy where she was, even if way into drugs. But still it was all, come on girl! Get some help, but fine get caught in rot in jail.

Adam was nice, but who the heck was he not fired at once. That guy was not a good border guard.

The cartel members were eeeeeeeevil.

So these two semidiots meet, lie, do it, fall in love and live happily ever after. After some violence and anger

Conclusion:
It was good!

The cartel members are always evil. When they are also dumb my problems start as well.