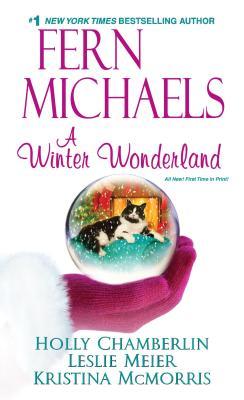 “A Winter Wonderland” by Fern Michaels
Angelica Shepard left New York for Christmas in Colorado to relax and unwind—but an out-of-control snowboarder almost had her laid to rest. When she wakes up in the hospital, all she remembers is the handsome angel who saved her…

“The Joy of Christmas” by Holly Chamberlin
Not all happiness is good for you—or that’s what Iris Karr thinks when she decides to move away instead of marrying her sweetheart Ben. Even years later, living with that decision isn’t easy—until a familiar face comes to call her home for the holidays…

“The Christmas Thief” by Leslie Meier
Elizabeth Stone is ready for a white Christmas in Tinker’s Cove, Maine—until a fancy Yule ball at the Florida hotel where she works dumps snow on her plans. The sponsor’s jewels have gone missing and the police are asking about her ties to a cute mystery guest. Good thing Elizabeth’s mother, Lucy Stone, flew down to surprise her. ‘Tis the season for a little investigating…

“The Christmas Collector” by Kristina McMorris
Estate liquidator Jenna Matthews isn’t one for Christmas nostalgia. But when one grandmother’s keepsakes suggest a secret life, unwrapping the mystery leads Jenna—and her client's handsome grandson—to the true heart of the holiday spirit…

My thoughts:
“A Winter Wonderland” by Fern Michaels
Wow, talk about instalove! I know it's a novella, but wait..they met...they talked for a few secs the next day...then they were in love?
Omg so insta.
This one had a case of needed to be longer. Needed some meat on the bones. It could have made a cheesy hallmark movie for sure.

“The Joy of Christmas” by Holly Chamberlin
Sad fact, but it was so boring, snooze alert.

“The Christmas Thief” by Leslie Meier
She should change jobs and make new friends...just saying.
A theft at the hotel!....at the end, so before that the book is about man meeting woman.

“The Christmas Collector” by Kristina McMorris
I finished this one yesterday...and I have forgotten what it was about. It must have been really bad

ConclusioN:
All in all a meh anthology