Joint Book Review: The Rest Falls Away by Colleen Gleason 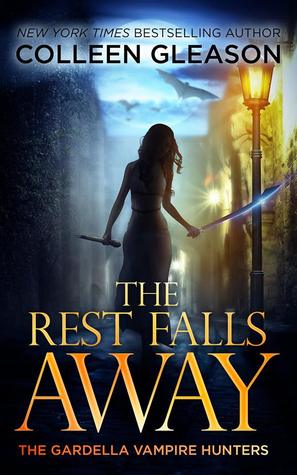 Vampires have always lived among them, quietly attacking unsuspecting debutantes and dandified lords as well as hackney drivers and Bond Street milliners. If not for the vampire slayers of the Gardella family, these immortal creatures would have long ago taken control of the world.

In every generation, a Gardella is called to accept the family legacy, and this time, Victoria Gardella Grantworth is chosen, on the eve of her debut, to carry the stake. But as she moves between the crush of ballrooms and dangerous moonlit streets, Victoria’s heart is torn between London’s most eligible bachelor, the Marquess of Rockley, and her dark, dangerous duty.

And when she comes face-to-face with the most powerful vampire in history, Victoria must ultimately make a choice between duty and love. Another joint review with Blodeuedd! :D This month we are giving 'The Rest Falls Away' a chance. :)


B: We will start with a simple one, how did you like Victoria?

C: At first I did not like her, I’ll be honest. I was worried she was going to be a “perfect” character, but as the story went along I liked her more and more. I think she’ll be even better in the next book. She seems like a badass in the making.

B: I can’t say I am overly fond of her. She was ok, a woman growing into becoming a vampire hunter. But I did feel she had a few TSTL moments, and I did not like how everyone just seemed to secretly lust after her.

C: I totally agree. It is annoying when every male wants her. However, I don’t think Max is that much in love...yet. I imagine he sees her as more as an annoying little sister. The ending...I think there was a shift. I think he is starting to lust over her now….which meh.

B: I agree, after that ending he will suddenly lust after her. And what do we have then? A nice little triangle, I am so over them!!!

C: Ugh me too. However, I think it worked okay-ish...because she really only had eyes for Phillip for the majority of time...

B: Haha, ok there it was, yes majority of time. When she did lust after the other guy ;)

C: WHICH I thought Sebastian was a total creep! I do wonder if we’ll learn more about him….I am curious more so, because I didn’t like him.

B: You didn’t? I did ;) But then he was a bad boy so there’s that. I like them. he was a creep but I liked him. Philip was so dull, Max was so in your face I am awesome at hunting vamps and you can only dance at balls.

C: HAHA agreed. Honestly...I wouldn’t have picked any of them if I were Victoria. Maybe she’ll get a new love interest in the next book. *fingers crossed*

C: Technically it wasn’t a “ya”, but I can totally see it falling into that category. I think the only reason it isn’t is because of the naughty scenes.

B: Yeah, that is what made me think ok this can’t be YA. But it so did not help with the whole love triangle, ok more than love triangle thing. And everything else felt sort of..nice too. More blood and gore please.

C: Agreed. When I have some vamp/paranormal action I want gore and blood everywhere! I think the author was trying to add a little spice of 19th century-ness too it, ya kno?

B: I did like the whole 19th aspect. I liked how she danced at balls, was courted, etc etc and then went out and fought vamps..as a woman! And she wore pants a couple of time!” Ohhhhhhh

C: PANTS! haha, but yeah. I thought it was a fun concept! It’s like...19th century Buffy the Vampire Slayer. WHICH I wanted to talk about the plot. I totally see the lack of information presented by the author. I wish she gave more about the “family tree”, what I assuming is that they have a few kids and one is chosen to be the hunter.

B: I did feel that was plot hole land as I told you. Cos ok sure one chooses to hunt, one doesn’t. BUT Vic is told she can NEVER take a lover or marry..right. isn’t she the last Gardella? I did feel that it did not work. There should have never been any kids at all. And what if they have 10 kids and everyone wants to fight? Cos we are told they all can, if they wanna…

C: Hmmmm. Good point. However, there is the human element like Vic’s mom...she fell in love. GASP! Which is silly that she can’t do both. Well, she could but it prolly would end badly…*cough*

B: *coughs* I do think they could have both. Just marry another Venator. Stay at home while you are preggers and then fight again. Women can do BOTH! ;)

C: Yes, however, I think the gang is worried that the spouse will try and prevent or try and help (which could lead to death or worse) which will compromise the mission. I totally get it...but c’mon. Just make it a rule you can only marry a fellow hunter or something. OR the spouse HAS to be trained. Something, because if you don’t reproduce then you will not have a future generation to fight! (I almost rambled about the fall of Sparta...haha)

B: Sparta stays!
But yes that would make sense! And considering she is the LAST Gardella, then she must have kids or kill EVERY vampire on earth….

C: Which that would be a headache and a long, long list. So...ending? What did you think?

B: Ok so without SPOILERS, I liked the ending, it was..evil. BUT I did NOT like how TSTL it made her. I was very very very very VERY angry at her. ALL CAPS ANGRY.

C: It is SO hard not give away spoilers for this one...because I liked the ending. It was indeed evil….and I really didn’t expect it. I was expecting………….something else. YES! GAH! I was angry at her too.

B: Your last thoughts then? I felt that it was good, ok at times, but I do not want to read more. I felt like one was enough for me this time. Even if the rest might actually be better.

C: I wouldn’t mind one more, but only if it is a freebie or I borrow it from the library ;) I would love to see the main baddie have a fight with Vic’s auntie. That would be fun! But overall, it was okay and a fun ride.

B: Let’s hope the last book in the series is a freebie one day and then we will read it and see ;)

C: Agreed! Good job! I am out of cookies since i am on major diet ATM, so here are some carrots in celebration *hands plate of carrots*.

B: pP in April then :) Looking forward to it

**In conclusion, this was a fun ride. A very interesting concept and some interesting characters. I would not mind checking out the next in the series...but like I said earlier...I would want it to be free. haha. There were spots where I wish the plot had more description and further explanation. I totally recommend this to those that like some vamp mixed with historical fiction! Out of five stars, I stamp this with 3 stars.

The book is not for me and the caption under your first pic has a typo, HAHAHAHAAHHAA!

Haha, I just read this on Linda's blog :) Awesome post you two. Funny and thoroughgoing. Loved it!

Ana, I know! Damn Bitstrip maker! (That's what I get for not double-checking THEIR captions)