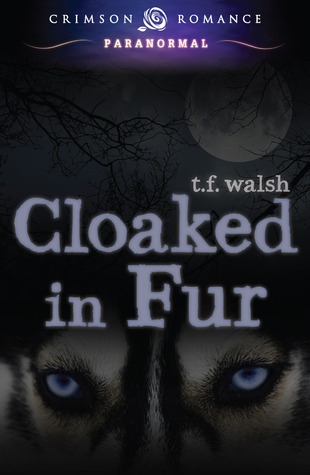 Author: TF Walsh
Title: Cloaked in Fur
Genre: Paranormal Romance, Fantasy, Murder Mystery, & Drama
Pages: ebook
First Published: August 2013
Where I Got It: My shelf (Given to me by author/publisher for my honest and unbiased opinion)

As a moonwulf, Daciana never expected to fall in love with a human. Hell, she never imagined that she’d abandon her pack, endanger everyone around her, and break the worst rule possible. But she did.

A rogue werewolf is killing Daciana’s friends, and she sets on capturing the creature. She’ll do whatever it takes to stop the beast. The police and her boyfriend, Inspector Connell Lonescu, are starting to question her involvement in the murders, which is endangering the pack’s secret existence. But when the pack alpha kidnaps Connell, revealing the awful truth about the creature and its connection to the pack, Daciana must choose between saving the man she loves and saving her pack family from certain death.

I pretty much read this all in one sitting. Work had to get in the way and so I had to put it down, but the moment I could I grabbed it up and finished it. Rarely do I finish a book in one day! I like my books how I like my wine, a little at a time. However, I had to know what was going to happen next!!

Poor Daci! She has had SUCH a crappy week. She is trying to find the elixir recipe, so she can keep herself from completely turning to a wulkin (a werewolf) and be forever attached to her pack and be together forever with her human boyfriend. However, at the same time that said love of hers is really feeling like she is hiding something and is being distant from him, so he's on her case trying to pry out her secret. AT THE SAME time there is a rogue wolf killing/eating people Daci knows which is making her look suspicious. AND at the same time her alpha is being anti-helpful with this rogue wolf, so she teams up with an ex flame from the pack to hunt it down. UGH! Poor chit! I would just take Connell and run. hahaha.

Poor Connell. I totally get why he was angry and hurt...I would be too...but MAN! I wanted to choke him and shake some sense in his head, but he didn't have the information I had on what she was trying to do so they can together for ever. UGH! I wish Daci would've let the secret slip, so his mind would be at some sort of peace (he would totally freak, so is his mind really at peace? haha)

Yes, this is a romance, but there is so much more at play (in which you can tell), so it made much better in my opinion. It felt real and I had no idea whether or not Connell and Daci will be together forever. It's a tough, tough road and there is so much at play. I loved it! It really had me on the edge of my seat since page one. Yes, I did get ansy, because I needed to know how everything was going to play out. There was one point where the action and drama seemed to drag on and on, but the author threw in a nice scene that gave me a breather before the next storm of action and drama took place. Like the calm before the last battle in a sense. It seemed impossible for a good ending!

WHICH...speaking of ending...kuddos TF Walsh! It certainly was a twist I did NOT see coming! I literally had to re-read a section to make sure my eyes told me right. I simply loved the ending. It left me wanting more, but it was not cliff-hanger-ish. I just really want to read more about the characters and that world in general. Especially the rest of the pack. What journey do they have next? Will they find love? Especially Daci's ex. He was alright and I felt bad because he really did care for Daci. They were suppose to be "mates", but then Daci wanted to be human and be with Connell.

In the end, this was such an amazing ride! I was giving up on PNR, but this one certainly resparked my love for the genre. It was a romance, there was so much more at play here. Murder mystery, action, drama, and just felt like "reality" (BC it is a fantasy, so reality for a fantasy) and I wasn't sure IF Daci and Connell would get there HEA. There was one point where it started to drag from too much action and drama, but TF Walsh threw in a nice scene and it calmed down for a moment before more action and drama kicked in for the last time. I totally recommend this to PNR and action lovers, also I totally recommend it for those that need a good PNR to get back into the genre. Out of five stars, I stamp this with 5 stars.

Your review is gorgeous and it's made my day... thank you so much. The sequel, which is coming out soon, will be all about Enre:)

B, it fits perfect!

TF, thank you so much for stopping by and giving me a chance to check out your book! I really did like it.