B's Monday: A Natural History of Dragons by Marie Brennan 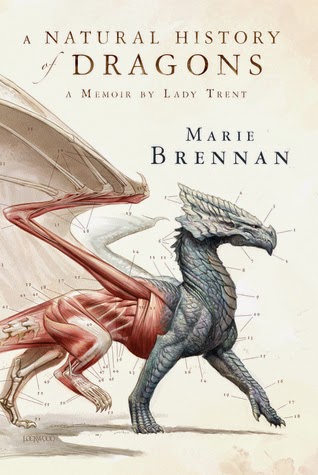 Blurb:
You, dear reader, continue at your own risk. It is not for the faint of heart—no more so than the study of dragons itself. But such study offers rewards beyond compare: to stand in a dragon’s presence, even for the briefest of moments—even at the risk of one’s life—is a delight that, once experienced, can never be forgotten. . . .
All the world, from Scirland to the farthest reaches of Eriga, know Isabella, Lady Trent, to be the world’s preeminent dragon naturalist. She is the remarkable woman who brought the study of dragons out of the misty shadows of myth and misunderstanding into the clear light of modern science. But before she became the illustrious figure we know today, there was a bookish young woman whose passion for learning, natural history, and, yes, dragons defied the stifling conventions of her day.
Here at last, in her own words, is the true story of a pioneering spirit who risked her reputation, her prospects, and her fragile flesh and bone to satisfy her scientific curiosity; of how she sought true love and happiness despite her lamentable eccentricities; and of her thrilling expedition to the perilous mountains of Vystrana, where she made the first of many historic discoveries that would change the world forever.

My thoughts:
I honestly did not know what to expect from this one. It sounded intriguing but how would it be?
Oh it was lovely, absolutely lovely. Set in a world akin to our own, except they have dragons. But I liked how it could be our world, our countries, and at the same time not. I liked how she was sent to have her season and get a man. I liked how she, Isabella, was fascinated by dragons. She wanted to learn, but she was a woman. A naturalist is not a woman's job. And I liked how she wanted a man for his library...good girl ;)
After getting married there is the real adventure. Where she gets to see dragons in the wild, and tell her tale. Because this is a memoir, and yes I could totally believe some woman 200 years ago wrote it. But as we do not have dragons, alas, it was only a fantasy novel.
The closeness to our world never gets to close. Cos that is a pet peeve of mine, why invent but do not go further? Here only the names of people are similar (like oh she is English, he is Russian), and certain other things. But it still is totally her world, her creation, and it was a lovely and fun creation.
I do look forward to reading more of Isabellas's adventures.

Oh, I LOVE the sound of this! And what an original "packaging" - so to speak. A great format to present the story!!! I'm reading this one for sure! Great review.