I'm a couple days late with those one, but that was because I forgot to actually post it. I was so busy this weekend with social events and being all social. Oh well. I actually had fought myself on which viewpoint to write this in. I couldn't decide between Andrew's and Coraline's. Both seemed like interesting views to write in. However, I decided to get outside the box and do Andrew's. I rarely write in men's viewpoint. Also, I thought it would be interesting to see how well I write a sex addicts POV. 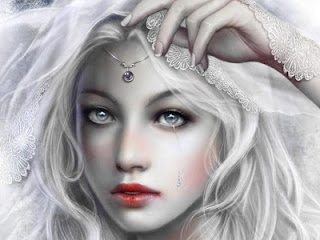 Coraline (not sure what else to call this)
by: Carole Rae

He shut the door like nothing had happened. Adjusting his pants he recalled what he had just done. Just because he didn't feel bad, did that make him psycho? If it did, he didn't care. He got what he wanted and he always got what he wanted...except that damn crown. His damned twin brother was just born 10 minutes before him.

Oh well, he took his pretty wife's virginity and it made him happy; even though it was technically rape. Like he said...he got what he always wanted. He waltzed right in there, under the pretense to wish her luck and congratulations for snatching up the most wanted bachelor throughout the kingdom. Like a fool, she hugged him. He chuckled out loud at her thinking it was safe to hug a man who was highly addicted to the play between the sheets. From there it was a downhill fall. He took her innocence and even made sure to leave a nice pretty mark on her lips. People would just suspect a nervous bride just chewing her lips until they bled.

He stopped at the nearest mirror, adjusted his golden hair and wiped he lipstick left behind as evidence on his lips. Once he looked dashingly handsome again, he entered into the church and went over to his brother to stand loyally at his side as Best Man. The ironies of life.

“H-how is she, Andrew? I-i-is she nervous? Is she h-happy?” Muttered his brother with that puppy-dog look upon his face. That look rarely left its station.

“She's fine, Leopald. Just a little nervous at all the bystanders will judge her dress. She was...I mean...she is very excited about being married to you.” Always a hint of truth was spread over his lies. She had been excited about marrying Leopald, but now that her innocence was stolen by her wife's brother, she wasn't too enthused anymore.

Before Leopald could say anymore, the bridal song began its tune. The Flower-Girl and the Ring-Barer made their cute entry into the room. Next all 10 of the bridesmaids came in. Andrew couldn't help but imagine how many he would be able to get into his bed tonight. The last wedding he managed to seduce two and raped one. What a life.

The moment everyone had been waiting for arrived, the lovely Princess Coraline made her way. Leopald stopped breathing when he seen how lovely his future wife. However, Andrew held a very smug look on his face. He couldn't help it. However, once Princess Coraline walked closer everyone could see her perfect face was blemished by a chewed lower lip and puffy red eyes. Her cheeks were red and she seemed extremely nervous. More so than normal.

Luckily he was smart enough to threaten her not to breathe a word of what happened to anyone, including Leopald, because he would have her family hunted down and killed. He could only dream of having that type of power. Leopald was smarter than he looked, because he had all sort of power removed when Andrew got a slap on the wrist for raping a serving girl. So much restriction came out of that. Only Leopald was allowed to approve any money given to him and where he was going. To Andrew's luck, Princess Coraline didn't know of such restrictions, no one really did. No one but Andrew, Leopald, and the treasurer. He just hoped it would stay like that.

Arghhh *stabs Andrew* I hate him!!!!
A really good flash! How you made me hate that smug effing bastard

B, I know! Andrew is an SOB and I hope Leopald finds out what he did to his wife. But I'm glad this story envoked some sort of passion. lol

Owwww, that man needs to be put in his place.. Or whipped would be good. Great flash!

Yeaaah, he's probably the biggest a-hole I've ever written about