I do apologize, this FF is a little long, but it couldn't be avoided ^.^. This is the third part of 'The Man in her Dreams'. Here is the first part and the second part of the story: 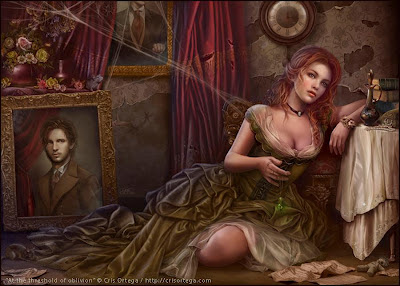 The Man in Her Dreams part 3
by: Carole Rae
"What?"
"Who the Hell are you!" Adair demanded, "Did she send you!"
"Who?"
"The faery!"
"No! I have no clue why I'm even here! Now will you remove that sword away from my throat? Is that how you greet a lady?" The young woman pushed a strand of red hair behind her ear.

Adair had to give credit to this woman. Normal people would be terrified with a sword at their throat, but she seemed...annoyed. Odd. However, he removed his sword and asked a little nicer, "Who are you and why are you on my land?"

Pushing herself up, she dusted off her green dress and replied, "I'm Hanna and I have no idea why I am here. I was caught in a storm an' I then I appeared here."
"Out of thin air?"

"Aye. Crazy, I know," She glanced him over him and she glared, "Did you bring me here?"

He was taken aback, "How and why would I bring you here?" As the words left his mouth, black clouds rolled in and thunder could be heard in the distance. Adair had a certain fear of storms and the vest he was wearing was new, so he grabbed Hanna's arm, "We'll talk about this at my house! Let's go!"

Without any other warning, Adair pulled Hanna along with him while he ran. If the faery didn't send this girl to add to his suffering, then why was she here? Why did he feel oddly attracted to her? What was going on?
So many questions, but luckily for him he had an abundance of time. Perhaps this Hanna girl was the answer to this curse that was placed on him by that damned faery 600 years ago.

The rain began to pelt down as they arrived at his house. The house, which had been his childhood home, had been built upon. Being alive 600 years gave much room of time to build the house.He pushed open the door and pulled Hanna along with him. He sighed as he breathed in the familiar smell of home, "Mhmm, you really need a servant to clean." Hanna muttered behind him.

Adair glared at her, "Who asked you? Now follow me. You can stay the night here and we can talk in the morning. I-I have business to do." Without waiting for her to answer, he lead the way to the guest room. It was odd, but Hanna seemed to be alright with all of this. Perhaps she was in shock? It was a little unsettling to him. Odd. The word 'odd' seemed to surround Hanna.

After passing a couple of rooms, he opened the door to the guest room, "Here. Um...I'll have breakfast ready in the morning...if you need anything...um...help yourself or ask me. Whichever." Hanna glided past him and into the room. He made sure to pick the cleanest and newest room, because she is a lady in the end. An odd one, but a lady nonetheless.

"Okay." She looked around.

"Well...night." He shut the door and ran to his room as thunder slammed around the house.

--
Hours later, the faery's laughter startled Adair awake. He scrambled out of bed and ran out of the room. Adair followed the smell of roses. The smell lead to a room. Not to any room, but a room where he put everything and anything that he couldn't bare to look at, but he couldn't bare to rid of. There was light seeping from the door. Slowly, he pushed the door open. He expected to see the faery waiting for him, but instead he saw Hanna on the floor next to one of his portraits that was given to him by the faery. The faery had a sick humor, she liked to paint him every 100 years and send it to him.

When the floor creaked, Hanna looked up with a necklace dangling from her hands, "Hanna? Wh-"She stopped him

"No, no where did you get this necklace? This was my late mother's necklace!" Hanna demanded, "What is going on here? Who is this faery and why did she send me here?"

Good one :D
And I have not written one :/ I blame bf and our crappy internet connection

Thanks!
It's okay...I almost didn't write one for this week. At least you had good reasons...I was just being lazy. haha