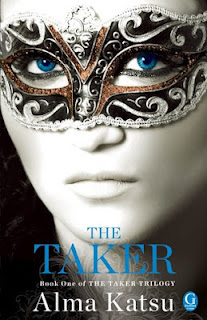 Title: The Taker (Book One)Genre:  Fantasy, Mystery, Adventure, Paranormal Romance, Historical FictionPages: 436
First Published: September 6th, 2011Where I Got It: My shelf (won it at a giveaway over Asian Cocoa's Secret Garden)

"True love can last an eternity... but immortality comes at a price... On the midnight shift at a hospital in rural Maine, Dr. Luke Findley is expecting another quiet evening of frostbite and the occasional domestic dispute. But the minute Lanore McIlvrae—Lanny—walks into his ER, she changes his life forever. A mysterious woman with a past and plenty of dark secrets, Lanny is unlike anyone Luke has ever met. He is inexplicably drawn to her, despite the fact that she is a murder suspect with a police escort. And as she begins to tell her story, a story of enduring love and consummate betrayal that transcends time and mortality, Luke finds himself utterly captivated.Her impassioned account begins at the turn of the nineteenth century in the same small town of St. Andrew, Maine, back when it was a Puritan settlement. Consumed as a child by her love for the son of the town’s founder, Lanny will do anything to be with him forever. But the price she pays is steep—an immortal bond that chains her to a terrible fate for all eternity. And now, two centuries later, the key to her healing and her salvation lies with Dr. Luke Findley.Part historical novel, part supernatural page-turner, The Taker is an unforgettable tale about the power of unrequited love not only to elevate and sustain, but also to blind and ultimately destroy, and how each of us is responsible for finding our own path to redemption."

This is the first book of the series and all I can to that is.....THANK GOODNESS! I need to read the next one. When I finished reading the last sentence, I closed the book and just laid there for a moment in awe. Alma Katsu sure did take me on adventure that I'll never forget! It's a rather dark and at times sexy book that I'll revisit in the future.

Alma Katsu sure does have an  imagination and I give her a round of applaud. This story really was an original. After I got past the first couple of chapter, I was addicted. Getting the book away from my hands was like pulling a tooth. When not reading my mind would drift to questions I had about what would go on next. The main question was, "what the hell is going on?" It sure was a mystery and again...kuddos to Alma Katsu.

The book had three POVs: Luke's, Lanny, and Adair had a little snipbit of storytelling. There was also three different time periods at play; of course modern day (Luke's), the early 1800s in Main (Lanny's), and 14th century Hungarian territory. I was surprised about how balanced Alma Katsu kept the book. She knew right where to put the breaks of each POV. When I was getting a little weary of Luke's POV (which annoyed me at points), the POV would switch back to Lanny. Kuddos to her, because I find that the balance is a little off.

Speaking of Luke...I didn't like the majority of the characters in this book. At points I did like Lanny, but that was when Jonathon was absent. She seemed much stronger and not as annoying as when Jonathon is around. He was her flaw. He was her weakness. He was also a jackass (excuse my profanity) and didn't deserve Lanny or even Sophia for that matter. Its pretty sad that I was rooting for Adair (who was the baddie) to win Lanny's heart. Haha.

One of the genres that this book is labeled as is Romance. I feel like it should be labeled as Anti-Romance. I felt like the theme was "love is crappy and nothing good comes out of it." I normally love stories where there is helpless and tragic love. However, I loathed Jonathon and I couldn't see why Lanny was tragically in love with him. Ugh. Sorry I keep drifting to ramblings on my dislike of good ol' Jonny.

I'm going to cut my ramblings short and just go to the conclusion bit. ^.^

Overall, I really liked this book. It was a dark, sexy, mystery, and adventure filled book. It left off with a little cliffhanger and I can't wait to read the second book. Even though I didn't like the whole Lanny-Jonathon thing or the majority of characters, I still highly enjoyed this book. I would recommend this to any who likes books out of the norm or for those who love dark tales of romance and mystery. Out of five stars I grant this one 5 stars. Woot woot!

I just haven't got into paranormal. The closest I have come is Harry Potter and Diana Gabaldon. Have you got a standout recommendation for me?

Have a great week

Mmmmm...Wuthering Heights is a good one. Its lightly touched with paranormal. Thats how I got paranormal books, I started with a book with that had a light sense of it and made my way up. I would recommend this book for you. :)