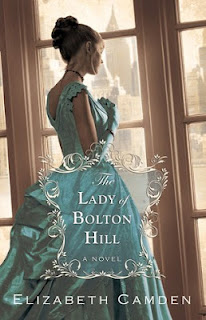 Title: The Lady of Bolton HillGenre: Christian Fiction, historical romance Pages: e-book
First Published: June 1st, 2011Where I Got It: My shelf (from Amazon)


"When Clara Endicott and Daniel Tremain's worlds collide after twelve years apart, the spark that was once between them immediately reignites into a romance neither of them thought possible.
But time has changed them both.Daniel is an industrial titan with powerful enemies. Clara is an idealistic journalist determined to defend underprivileged workers.Can they withstand the cost of their convictions while their hearts--and lives--hang in the balance?"

Sorry about the lack of book and movie reviews. I've been in a funk the last few weeks. Hopefully, this funk comes to an end since I'm on summer vacation!

Anyways...this is the first book I've read by Elizabeth Camden and probably the third Christian fiction I have EVER read.


I really have mixed feelings about this one. I usually avoid Christian fiction novels, but a few will slip into my mist if it doesn't broadcast that it is a CF. This one was like that...you can't even tell that it is a CF until about a third into the book when Clara (the heroine) starts preaching to Daniel about forgiveness. I was a little let down that it was a CF but I decided to continue reading.


I may believe in God in my own way, so I don't hate CFs in that aspect, but I do hate when the characters in CFs shove religion down in other characters throats. Clara is the epitome of this. She pretty much ties Daniel down and shoves piles and piles of "God-talk" in him. She also does the same to the baddie, Bane. Those two never stood a chance! At first I really liked Clara, but through-out the novel she began to do some stupid things and just be a general annoyance. I would have paid someone to kidnap her myself!


The same can be said of Daniel (the hero), he was rather over-emotional and annoying too. He's pig-headed and has a bad temper. Okay, I have a bad temper, but really? I can't say much about the events that caused him to throw a tantrum, but I feel like he would go overboard; like a two year old.


Besides for the overzealous Christian, the pig-headed lover, and some other annoying characters I really did enjoy this tale. It interested me on how everything would work out in the end. However, I wasn't too concerned because the climatic part of the novel was dashed when you realized how sway-able the baddie was. Really? That was a little picture perfect for my taste, but it worked with the theme of the story.


All-in-all, I really do have mixed feelings about this. It was enjoyable and a fun read, but the characters really got on my nerves. Perhaps I'm not being very fair because I'm a little cranky with work and the people at work. I've just began to run my own shifts at work as a supervisor and I'm adjusting with all these new responsibilities, so my tolerance with people is at a very low these days. ^.^ I've been debating with myself on what to rate this book...so I'm going to just go with a solid 3.

Nope, not for me. I hate when they shove religion down your throat

Same here. If I had none that I would have avoided that like the plague.