Happy late Friday! I meant to post this sooner, but I fell asleep. haha. What is this excatly? Well, every Monday Dottie over at Tink's Place posts a picture and then on Friday (Flash Fiction Friday) we post a story to go along with the picture. The story has to be about 350 words, give or take. I've been meaning to join in on the fun for a while now, but I always think of an excuse not too. I've missed out. Anyways, here's this week's picture and my story: 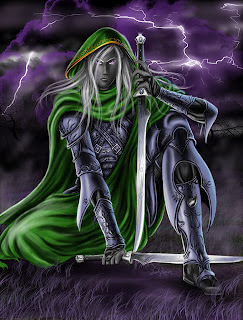 The Spirit Guide
by: Carole Rae
"I'm going to bed." Yelled Johnny as he stomped up the stairs.

"Night, hun." Replied his mother who was staring at the TV with a cigarette dangling between her lips.

"Whatever." Mumbled Johnny to himself as he slammed the door to his room. Quickly he removed his shirt, kicked off his jeans, and threw himself unto the bed. Within moments his eyes shut and he was gone from reality.

Johnny shot up. He looked around and he wasn't in Kansas anymore. He some how had managed to land in a dark field, in the middle of the night, with some odd fellow with glowing purple eyes. Johnny was utterly speechless.

Urlec gave a half smile,"Yes. I'm the one who watches over you and makes sure your on the right path."

"Well, thank you, but we have things to discuss."

"To put it simply, you're a horrible human being,"Johnny went to protest, but Urlec waved one his daggers, "Enough. You know you're a horrible person, that is why I brought you here. I have failed as a spirit guide. I tried to help you and I failed you. You make people's lives horrible. You judge others before even knowing their name. You hate without reason. You are hated by pretty much everyone, but no one stands up to you because they fear you so. I don't fear you...you fear me. Oh yes, I can see it in your face."

Johnny had paled and his eyes widened, once Urlec was done speaking, Johnny said, "Why are you saying this to me. It's my life and I don't think I'm that bad."

Urlec shook his head and knelt down. Lightening began to crash behind him and lighten the sky, "You really have no idea do you?"

"You make people live through Hell and now it's time for a little karma, Johnny."

Great flash and welcome :D
Lol, the week when no one else has made one, we have been SO lazy. But I will try one tomorrow

B, thanks. :) Maybe it's good I got a week when everyone else was being laid back. hahaha, because my stories aren't half as good as your guys'

Great story. I'm so glad you're joining in, although I'm one of those guilty of skipping this week.

Thanks Carol. :) It's okay for people to skip once in a while. It keeps life fresh! :D