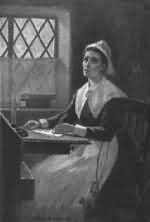 Hello everyone! Have any of you heard of Anne Bradstreet? I know I haven't until my American Literature class. Every week we are assigned to read an author or authors or whatever. This week we were instructed to read all of Anne Bradstreet's works, which wasn't too hard because she doesn't have many. Well, I really like her! She's a touch dark and cynical at points, but then other times she's very hopeful and sees God in everything. She's a pretty good poet and she made my list of top 10. In honor of my American Literature class, I'm going to try and post one poem or reading I like from each author we are instructed to read from. It's something to do, I suppose. Well, enjoy a nice poem from Anne Bradstreet:

"In Honor of that High and Mighty Princess, Queen Elizabeth
Proem.
Although great Queen, thou now in silence lie,
Yet thy loud Herald Fame, doth to the sky
Thy wondrous worth proclaim, in every clime,
And so has vow’d, whilst there is world or time.
So great’s thy glory, and thine excellence,
The sound thereof raps every human sense
That men account it no impiety
To say thou wert a fleshly Deity.
Thousands bring off’rings (though out of date)
Thy world of honours to accumulate.
‘Mongst hundred Hecatombs of roaring Verse,
‘Mine bleating stands before thy royal Hearse.
Thou never didst, nor canst thou now disdain,
T’ accept the tribute of a loyal Brain.
Thy clemency did yerst esteem as much
The acclamations of the poor, as rich,
Which makes me deem, my rudeness is no wrong,
Though I resound thy greatness ‘mongst the throng.
The Poem.
No Phoenix Pen, nor Spenser’s Poetry,
No Speed’s, nor Camden’s learned History;
Eliza’s works, wars, praise, can e’re compact,
The World’s the Theater where she did act.
No memories, nor volumes can contain,
The nine Olymp’ades of her happy reign,
Who was so good, so just, so learn’d, so wise,
From all the Kings on earth she won the prize.
Nor say I more than truly is her due.
Millions will testify that this is true.
She hath wip’d off th’ aspersion of her Sex,
That women wisdom lack to play the Rex.
Spain’s Monarch sa’s not so, not yet his Host:
She taught them better manners to their cost.
The Salic Law had not in force now been,
If France had ever hop’d for such a Queen.
But can you Doctors now this point dispute,
She’s argument enough to make you mute,
Since first the Sun did run, his ne’er runn’d race,
And earth had twice a year, a new old face;
Since time was time, and man unmanly man,
Come shew me such a Phoenix if you can.
Was ever people better rul’d than hers?
Was ever Land more happy, freed from stirs?
Did ever wealth in England so abound?
Her Victories in foreign Coasts resound?
Ships more invincible than Spain’s, her foe
She rack’t, she sack’d, she sunk his Armadoe.
Her stately Troops advanc’d to Lisbon’s wall,
Don Anthony in’s right for to install.
She frankly help’d Franks’ (brave) distressed King,
The States united now her fame do sing.
She their Protectrix was, they well do know,
Unto our dread Virago, what they owe.
Her Nobles sacrific’d their noble blood,
Nor men, nor coin she shap’d, to do them good.
The rude untamed Irish she did quell,
And Tiron bound, before her picture fell.
Had ever Prince such Counsellors as she?
Her self Minerva caus’d them so to be.
Such Soldiers, and such Captains never seen,
As were the subjects of our (Pallas) Queen:
Her Sea-men through all straits the world did round,
Terra incognitæ might know her sound.
Her Drake came laded home with Spanish gold,
Her Essex took Cadiz, their Herculean hold.
But time would fail me, so my wit would too,
To tell of half she did, or she could do.
Semiramis to her is but obscure;
More infamy than fame she did procure.
She plac’d her glory but on Babel’s walls,
World's wonder for a time, but yet it falls.
Fierce Tomris (Cirus’ Heads-man, Sythians’ Queen)
Had put her Harness off, had she but seen
Our Amazon i’ th’ Camp at Tilbury,
(Judging all valour, and all Majesty)
Within that Princess to have residence,
And prostrate yielded to her Excellence.
Dido first Foundress of proud Carthage walls
(Who living consummates her Funerals),
A great Eliza, but compar’d with ours,
How vanisheth her glory, wealth, and powers.
Proud profuse Cleopatra, whose wrong name,
Instead of glory, prov’d her Country’s shame:
Of her what worth in Story’s to be seen,
But that she was a rich Ægyptian Queen.
Zenobia, potent Empress of the East,
And of all these without compare the best
(Whom none but great Aurelius could quell)
Yet for our Queen is no fit parallel:
She was a Phoenix Queen, so shall she be,
Her ashes not reviv’d more Phoenix she.
Her personal perfections, who would tell,
Must dip his Pen i’ th’ Heliconian Well,
Which I may not, my pride doth but aspire
To read what others write and then admire.
Now say, have women worth, or have they none?
Or had they some, but with our Queen is’t gone?
Nay Masculines, you have thus tax’d us long,
But she, though dead, will vindicate our wrong.
Let such as say our sex is void of reason
Know ‘tis a slander now, but once was treason.
But happy England, which had such a Queen,
O happy, happy, had those days still been,
But happiness lies in a higher sphere.
Then wonder not, Eliza moves not here.
Full fraught with honour, riches, and with days,
She set, she set, like Titan in his rays.
No more shall rise or set such glorious Sun,
Until the heaven’s great revolution:
If then new things, their old form must retain,
Eliza shall rule Albian once again."

I think I will stick with my WWI poets and Tennyson :=)

:) It's okay, Bradstreet isn't for everyone. My professor was rather baffled when my group had a discussion about her for 15 minutes. lol.