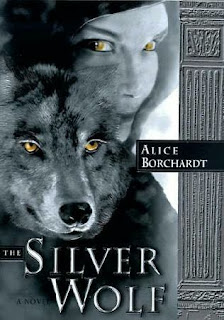 Author:  Alice Borchardt
Title: The Silver Wolf (Legends of the Wolf #1)Genre: Fantasy, Historical Fiction, a splash of romance, Adventure  Pages: 451
First Published: 1998Where I Got It: Borrowed from Library


"Regeane is a fatherless royal relation who happens to be a werewolf. Her guardian, Gundabald, and his venal son Hugo plan to recoup their fortunes by marrying Regeane to a wealthy bridegroom, even though she might inadvertently make him into a bedtime snack. Gundabald forces her into apparent compliance by threatening to reveal her secret to the Church, which would burn her at the stake. As the bridegroom, Maeniel, journeys to Rome to claim her, Regeane discovers allies in her quest to defeat Gundabald's machinations, including some very strong, funny, and levelheaded women. Unfortunately for Regeane, she also has more powerful enemies than Gundabald.

Alice Borchardt brings 8th-century Rome vividly to life. Her language is earthy and sensuously descriptive: "The wolf visited Regeane's eyes and ears. The girl staggered slightly with the shock. The light in the square became intense. Smells an overwhelming experience: wet stone, damp air, musty clothing, perspirations shading from ancient sticky filth to fresh acrid adrenal alarm'"
This is the first book I've read by Alice Borchardt. I was drawn to this book for two reasons: one, for the cover. Two, because I've been itching for a good werewolf story and this seems the one to subdue a werewolf-fix. I will say this here and now....I didn't know that Miss Alice was Anne Rice's sister until after I was nearly done. Even though I like Anne Rice, my opinion will NOT be swayed. Just saying...
This book did subdue the need for a good werewolf story (for the moment). It was everything I expected and more. I just loved the different take on the werewolf that Alice Borchardt took. The werewolves did have a hint of the Twilight Saga werewolfiness to them, but the similarities are slim. Don't be looking at this book as a Twilight-ie book. The book is WAY, WAY different.
Which would bring me to my other great love of the book...it was a very dark tale at some points. Regeane (the heroine) is pretty much an orphan at this point and is left at the mercy of her Uncle Gundabald. She is also has to deal with the occasional evil demon or gruesome ghosts. She's just a child, like 17, so I feel horrible for her! My heart completely sank at the revealing of a pretty big secret. I had to literally shut the book for a few days. However, she didn't let any of these dark times and life changing secrets keep her down, she would jump right back up and keep fighting! I really liked Regeane and how strong of a female character Alice Borchardt made her; I do get rather exhausted of the pitiful women who sulk and what for the man to save them. However, Regeane would realize when she needed help and she would allow others (men or women) to step up and give her help. Yes, she was brave and tough, but she wasn't stupid about it.
Yes, this book did take me a rather long time to finish, but that's not an awful thing. I took my time, because this novel is one of those that need a little extra time. Alice Borchardt does tend to take a long time for some events. Some events would drag on and on and I would wonder if it would last forever! I had skim once in a great blue moon, just to keep my interesting because the author tend to ramble on and on. Don't get me wrong, I love ramblings (I am one)! A breaking-point does need to be installed at a certain point. That was one of my biggest issues.
Another issue was the darkness of the book. I know I had said I admired and liked how dark it was, which is true, but I still wasn't a fan. Maybe I'm mixing some emotions into this "dislike", but I felt like many points did get a little too dark for my taste. For example...when a certain character (can not mention names or the reasons why) was beaten pretty much to death near the end. The details and feel of that whole part really made me wince. This character was missing some fingernails and...well...the character was a bloody mess. It just really got to me for a little bit. Also, I was a little unsure about the extreme details that was given to the lepers. I'm pretty sure everyone who reads knows what a leper is. Why must there be horrid details that made me wince. Again, I do like dark stories and I liked how well Alice Borchardt brought in the dark at certain points. I must say though...there were a couple points that crossed a line for me.
Anyways, the biggest applaud must be paid to the details and the word usage. The details and descriptions were phenomenal! I really felt like I was there and with the characters in their world. It was simply great. The world was so vivid in my mind's eye and even though it was not the best of places in Rome during the 8th century, I still enjoyed the ride.
All-in-all, I really enjoyed this book. The world felt so alive, the characters felt real and 3D, the werewolves were pretty epic, and the darkness may have thrown me off track a little but I stilled enjoyed it. This book is a book for more of the mature readers and for those looking for a novel like Twilight or any of the others. This book belongs in a whole different genre. I do recommend this for those that need a nice werewolf or fantasy fix. This will fit many bills. ^.^ However, I probably will not continue to read on with the series, I feel like this was a good ending and I'm satisfied. Out of five stars, I grant this one 4 stars.
Favorite Character(s): Regeane (great female character) and Maenial (great guy, too bad he didn't have that much airtime in this one)
Not-so Favorite Character(s): Gundabald (SOB of the Year nominee for the year; he got the ending I would have wrote him if I was the author) and Basil (another nominee for the SOB of the Year)

Sounds good and I sure did not know that Rice had a sister who is also writing.

Yeah, I didn't know either! I also didn't know that that sister died recently! :0 She's not bad, not as good as her sister though.