Here is this week's picture. There are so many stories that popped into mind when I seen this. It was so HARD to just pick one...but I did and here we go: 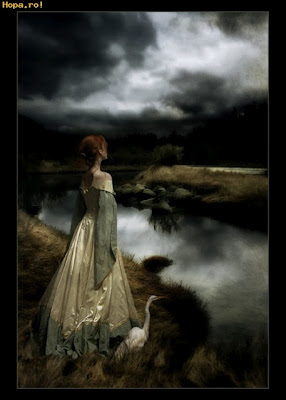 The Man in Her Dreams

Black clouds were rolling in and thunder could be heard in the distance. The anticpation of a heavy rain could be felt deep in the bones and must sane people would head to safe ground. However, a figure stood watching the storm come. A young woman just stood there along with her ever faithful companion. The young woman was lost in some daze until a high-pitched voice rang among the dry grass. The voice wailed her name, "Hanna! Hanna! You stupid girl! There is a storm comin' don'tcha know! Get inside before you get soaked to the bone!"

The woman, Hanna, didn't move her gaze from the clouds, "I will step-mother."

The step-mother with a grunt and a shake of the head went back into the warmth, while Hanna didn't move a muscle. The step-mother didn't fight much with Hanna, because this was normal. Before every storm she would walk outside and stare into the clouds as if looking for God himself. Many a passerbyer would wonder why Hanna stood there and would ask the step-mother or the father, but they would both just shrug and say not a word.

The little stork, who was Hanna's only close friend, shoke its feather and squawked at her as if wondering how long they were going to be out there. Hanna sighed and continued to stare, "He was in my dreams again last night. Who is he? Why does he haunt me?"

Some little droplets began to descend, which would end Hanna's one-on-one with the black clouds. Grabbing her little stork, she whipped her skirts about and began the hike back to her abode. Thoughts about the strange man still ate away at her brain. Who was he? Since she could remember she would dream of him the night before any rainstorm. Why?

Wind and heavy rain knocked Hanna out of her thoughts. The thunder began to boom louder and louder. With a curse, Hanna heaved her skirts and began to ran. At every second the storm seemed to worsen. However, it seemed she was getting nowhere closer to her abode. Worry began to set in and Hanna quickened her steps. Not only was Hanna beginning to get scared, but the stork began to squirm and flap its wings wildly.

The stork's wing smacked her in the eye and Hanna went stumbling to the ground, "Uggh! Wait! Come back!" Without a look back the stork flew off as quickly as he could. Hanna tried the stand, but the wind and rain kept her down, "Father! Step-mother! Someone!" Her yells of help was pretty much silenced by the thunder. Terrified, Hanna began to crawl. The wind and rain seemed to get heavier and the thunder louder!

And then...it suddenly all stopped.

Hanna pulled herself off the ground and was completely astonished! She looked around and confusion dawned on her. Where was she? She was in the middle of a wheat field, with not a tree or house or rock in sight. She then spotted a figure coming towards her. She wanted call out and ask where she was, but her voice caught in her throat. For some eerie reason the figure seemed familiar.

Once the figure came into close view, Hanna's eyes went wide and she gasped, "YOU! You're the man in my dreams! Who are you!? Where am I?" The man from her dreams was tall and lean with black hair. His eyes were a brilliant shade of blue-grey.

The man stopped about five feet away and smiled a gorgeous smile, "Yes, it's me. What a silly question to ask, lass. I'm your one and only true love. I brought you here so I can ask you a favor," She just stared, "Can you wait for me? Can you save me from myself?"

At this Hanna put her hands on her hips and glared, "Who the hell do you think you are? Why would I wait for you. I don't even know you! Send me home at once!"

The man lefted an eyebrow, "My dear sweet lass...I'm your Knight-in-Shining-Armour and this...this is just a dream." He snapped his fingers and there was blackness...

Hanna opened her eyes to a bright blue sky. She sat up, dizzy for a moment. Once her eyes were adjusted she went to stand, but she felt the cool blade of a sword on her throat. The man holding the sword was the same man from her dreams and he growled, "Who the Hell are you, woman?"
~*~
^.^

Great story. I like how you took the end in a different direction than I thought you were going? I do wonder what's going to happen next.

NO! Oh you are so evil! Please do not leave us there! What happens next?

Carol, thanks. I love adding twists at the end. :) I wonder too, we'll see what pictures will be posted and we'll see were that leads us.

B, MWUAHAHAHAHA! I must apologize though...I wrote this after I finished 'Hunter Moon', so I was slightly bitter. Blame Cait Lavender for the ending to this. :D

*flutters eyelashes* Who me? bahaha