Happy Friday everyone! The original plan was that I wasn't going to share a story this week, because I couldn't think of anything for this picture. However, when I was on the way home from work today the story smacked me in the face! I am giddy and excited to share this story, because this is part 2/prologue to last week's story! ^.^ 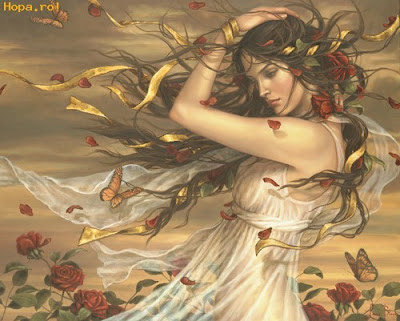 The Man in Her Dreams: The Faery and her Roses
part 2/prologue
by: Carole Rae

The Man of Hanna's dreams kicked a lone pebble across the dirt, lost in his thoughts. Had it really been 600 years? It still felt like yesterday that The Man had finally came home from that dreadful war and found himself in a more dreadful situation? What was he thinking! He was even warned, but did he listen? No! He kicked another pebble, which bounced off into the long, golden wheat field he was passing. He stopped, heaved a sigh and against his will began to relive that infamous moment that changed his life and world forever....

The Man may have just returned from the bloody war from the south that was deemed a necessary war by Pope Eugene III, but he still looked young, eager, and excited for the next step of life. He may have experienced some horrid things, but he still held a bright thought for the future. In his mind he believed he had finally earned his dues to marry a nice Scottish girl and settle down. The only thing was...to actually find a girl he can love.

The day that would forever change The Man's life forever occurred on a nice autumn evening. After eating alone, which was normal since his parents passed years ago, he decided to take his normal walk in the forest. Many feared the forest, but he laughed at those superstitious folk. As he began his journey into the forest, an idea formed in his brain: change things up a bit and go a different route! He decided to follow this idea and walk a new way.

A few minutes later, he found himself in a clearing with rows and rows of red roses. The Man wondered if he had accidentally stumbled into someones garden. He took a couple steps forward and his gazed then settled upon a vision from a dream. A women in a thin, gauzy dress and golden ribbons intertwined in her hair was dancing among the roses while butterflies danced along with her. There was no music, just the wind making rose petals glide in the air. The Man went speechless and watched. He had never seen something so beautiful in all his days!

Without warning the woman stopped and looked at him. A mischievous smile formed upon her lips and walked toward him and said, "I would run if I were you."

The Man shook his head, "You are so lovely and I can't help but watch you dance."

The woman giggled, "You silly, silly little human." She walked up to him, grabbed his face, and kissed him. The Man melted in her arms and was lost in this magic kiss. Once the kiss ended, he felt like a piece of him was torn away, "I'm sorry, but I did warn you."

"What?" The Man asked feeling a black void creep upon his heart.

"You will never have rest. Part of your soul runs free upon the wind until she comes and saves you." She gave him one more kiss upon the cheek and whispered in his ear, "I simply do love curses. Don't you, Adair ?" With a giggle, her and the roses were gone. Adair looked all around for the woman-faery and the roses, but they were gone. Only one petal remained. He slowly picked it up and fell to the ground with the feeling that his life would be forever different.......

Adair snapped out of his thoughts when he heard the woman-faery's laughter and then a large BOOM! He grabbed his sword from his side and ran across the field. He then stumbled upon a woman lying on the ground. Her red hair was spread upon the green grass. Was this some trick that the woman-faery was playing? Adair just stared at the woman with a cold and wondering gaze. The woman fluttered her eyes and sat up, bewildered. He placed his sword upon her throat and demanded, "Who the Hell are you, woman?"

Now you are just being evil again ;) The cliffie is still there so I am waiting for part 3 :=D

A nice one - great somebody else is writing a series! Those nice autumn evenings! :)

Anachronist, I love reading series! This wasn't suppose to be a series, buuuttttt it'll probably be a mini-series.

I'm late in making my rounds... really late. :) But wonderful! I want to know more about that curse and the woman. :)

Glad you have joined us!

Very nice. I love how you tied it into last week's, but showing his point of view.

Melissa, it's okay. Better late than never I always say. Thanks for reading my stories!

Carol, thanks. :) The idea was a random idea that popped on me while I was driving.