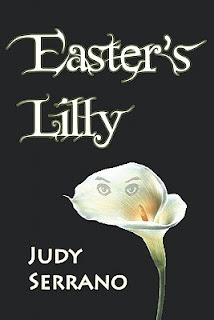 Author:  Judy Serrano
Title: Easter's Lilly (1st of Lillly's series)Genre: Romance, Action, Drama, Fiction Pages: e-book, 296
First Published: December 16th, 2010Where I Got It: Given to me to read and review for Ever After Pr


"It was Easter Sunday; the day Lilly's life went from safe and comfortable to dangerously unfamiliar. Her transformation takes her from a small town girl having an affair with a low ranked gangster in the Montiago crime syndicate, to a woman of grace and fortitude married to the head of the organization.Easter's Lilly is an inspired journey from the idyllic to the darker side of self-discovery. Read as the over-privileged brothers embark on their journey that twists and turns down the road of unbridled passion in this first book of the series."


At first I was a little unsure if I would actually like this one or not. It was a little sluggish and I couldn't stand Lilly (the heroine). However, once the action and drama heated up I was drawn like a moth to the flame. It was hard to walk away from. Judy Serrano has a way with words and she did a wonderful job making the action and gun play seem realistic. Unlike a lot of books it seems forced and its hard for me to envision whats going on.


Not only was I entranced by the words and action, but I was very interested in the darker side of the world. We've all heard of the drug lords and etc, but it was interesting to see "behind the scenes". You have to be careful each and every step or you'll end up dead. I loved the tension and the story of love between Max and Lilly. It was such a cute and innocent romance, buuut I can't stand Max or Lilly. How odd?


I feel like Lilly is suffering from the Bella-Swan syndrome. I'll say it bluntly...Lilly is an idiot. However, every SINGLE man "falls" in love with her. How? Why? Yes, she's pretty, but she's an idiot. I don't understand it. Her personality is highly flawed, like Bella Swan from the Twilight saga, but every yahoo wants her and "needs" her. I simply don't understand.


ANYWAYS, sorry for the rant up there.


The ending was a love-hate thing for me. I felt like there were many different ending the author picked, but she just added them all and ended with a ginormous cliff-hanging. I mean HUGE! I felt like I was running along with the story at full speed, then I tripped over a rock and slide off the edge of a cliff and now I'm dangling by with by a twig. That's how I feel with that ending. Yes, cliff-hangers are a good thing, but you can't just leave it the way she did! *SPOILER ALERT* She ended it with Lilly's first child being kidnapped! All you read is that they're looking for the child, while Lilly is cuddling with Little Diego's teddy bear. UGGGH! It's driving me bananas *END OF SPOILER* However, I loved the ending. It's a great way to make the readers wanting to read the next in the series. Brava, Judy Serrano! Brava!


Besides for Lilly and my love-hate for the ending, I really enjoyed this book. It was certainly an adventure and a drama! I can defiantly see this becoming a TV show or a movie. If it were to become either of the two, I would watch it. I would recommend this to those who would love a good action/drama, gangster lovers, and for those who just like a good book. Out of five stars I grant this one 4 stars. ^.^

I have a love/hate thing for Lilly. I didn't even think of the Bella Swan complex. I read this before I read/saw the movie Twilight. I wasn't a fan of Twilight back then. But you are right about that...the men just seem to fawn over her and I just didn't get it. LOL

I am bad :/ I read the spoiler. It was just too juicy not to read. Bad bad me

Stephanie, yayy at least you understand me. I try to like her, but it's just not happening for me. She reminds me of a blonde Bella. haha. But I really like Jusy Serrano's writing. It's very flowy and nice.

Blodeuedd, it's okay...I'm a bad coconut too. I ALWAYS read the spoilers. haha.