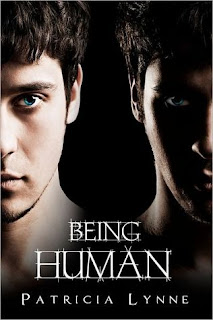 Author:  Patricia Lynne
Title: Being HumanGenre: YA Fiction, fantasy, and a touch dystopia Pages: e-book, 284
First Published: August 25th, 2011Where I Got It:Given to me to read and review for Ever After Pr


"For Tommy, there is only one thing he needs to do: survive. Only surviving isn't that easy. The hunt for blood can be tricky when humans know to fear the night. Desire sits on the edge of his mind, urging him to become the monster humans think he is. Vampire Forces, a special branch of police, is determined to turn every vampire to ash. Tommy included. The only human Tommy can trust is his twin brother. A bond connects them, and with Danny's help, Tommy starts to understand the human world he struggles to survive in. He'll learn what friendships means and feel the sting of betrayal, find that sometimes the worst monsters are very human, and come to understand that family means more than blood. Tommy just wants to survive and he knows what he needs to do. But with the number of humans that mean more to him than a meal growing, he'll learn there's more to life than simple survival. He'll discover being human doesn't mean being a human."


This is the first Patricia Lynne book I've read and the first YA vampire tale I've read since Breaking Dawn. I can finally say I'm back on the train of vampire novels (as you can tell, because I've read two of them in a row). I'm still team Werewolf, but hey...I love me some vampires. Being Human not only sated my need for a good vampire story, but a nice YA book also.


The first thing I would like to point out is that Patricia Lynne wrote vampires on how I see them: survival-orientated. Blood is the first thing they care about and are more beast than human. I was excited to read how I perceive the vampire-kind. Thank you Ms. Lynne. Thank you!


Being Human was an interesting book and kept my attention for the most part. My attention did tend to drift off at certain points, because I found Tommy (the main dude) a little boring. I don't know, but I'm not a big Tommy fan. Well, I felt mostly neutral towards him. I didn't loath him and I didn't adore him...he was just there. Perhaps it was because he was just there. Throughout the story he would just get blood once a week and visit his twin. For the majority of the book I was...well...bored.


The first and third part of the book was very, very boring (in my opinion). The story was stagnant and nothing would happen for pages and pages at a time. However, I did find some of Tommy's musings rather interesting and his questions funny. For example...he didn't get the point on couples going out for dates. He didn't understand how that helped people's "survival" or make the relationship "better". I found it very interesting and very realistic for if vampires were real.


I also loved how Ms. Lynne had Tommy find some of his humanity back. He did find out some main points on being human (note...TITLE OF BOOK, haha). He may have been a "monster", but deep inside he did retain some of his past human traits. He had the ability to be self-conscious, have will-power, have some sort of compassion, and most of love. It made me made that the people of this book were more heartless than the vampires themselves. If you sympathized with the "monsters" then you were now the out-group and beaten. If you happened to become a vampire, then you were shunned and if caught they would do experiments on you and then kill you publicly. At times the humans were more monsterly than the monsters themselves. Horrible. However, if vampires were uncovered in our time, I bet their fates wouldn't be much different.


ANYWAYS, this was an interesting book and I liked it. The only thing that really makes me not LOVE this book was how slow the tempo was. Yes, yes, I know not every story should be fast-paced and whatnot, but I couldn't help but skim some areas. Other than the slow bits, I really liked the story and I'm so happy someone else envisions vampires the way I do! They are NOT human and NOT Edward Cullen. Yes, vampires still retain some human qualities, but the first thought for them is survival.


ANYWAYS, sorry...I keep regressing and getting off topic.


Overall, I did like this book and I wish I could love it like everyone else...but the slow parts made me not a happy reader. I loved the world that was presented. It felt like a possible world that would exist if vampires were uncovered. I would recommend this to YA lovers and vampire book lovers. I would caution twilighters to stay away, because this is nothing like the Twilight books. I do like the Twilight books, but this is left field. Out of five stars I grant this one 3 stars. In all reality it would be 3.4, but I don't give decimals, so I rounded.

I love books that make us see that sometimes we are bigger monsters than the ones we imagine! Great review!

Thanks for the review Carole. Glad to see someone else envisions vampires the same way I do. =)

Allison, thanks! Yeah. The humans in this world were horrible people! I would ashamed of them if I lived in this book.

Patricia Lynne, thanks so much for stopping by! It means a lot. I loved you writing style and the story you wrote. ^.^

I am glad that you are back on board, though I..nah, do not wanna board the YA vamp train