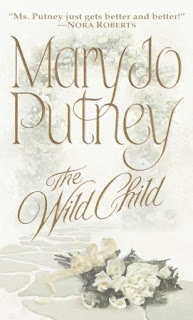 Author:  Mary Jo Putney
Title: The Wild Child (1st of The Bride Trilogy)Genre: Historical Romance, DramaPages: 365
First Published: 1999Where I Got It: My Shelf (Amazon)


"Bribed by Kyle, his twin brother, Dominic Renbourne agrees to take his twin's place for a few weeks at Warfield Manor, where he is to pay court to Lady Meriel Grahame, the orphaned heiress Kyle intends to marry. The last thing Dominic expects is to be entranced by a silent sprite whose ethereal beauty is as intoxicating as the flowers and trees that surround her.

For much of her life Meriel has lived outside normal society, finding joy and peace in her garden, safe from the nightmare that nearly destroyed her as a child. She is content with solitude until the handsome intruder begins to inspire dreams of life beyond her sanctuary. Despite his longing, Dominic's sense of duty keeps him away from his brother's future bride, but Meriel's untamed spirit proves more powerful than Dominic can resist . . ."


Not only is this the first of The Bride Trilogy, but this is also my first book by Mary Jo Putney. I've heard countless applauds from this author, so I decided to check her out! The first book I stumbled across was The China Bride, which I really wanted to read until I realized that it was the second book of three, so of course I had to read the first on first. Luckily for me it was on sale, so I snatched it up! I will say it here and now...Mary Jo Putney lived up to her good reviews.

This was an interesting tale of love. Meriel (the heroine) was a little anti-social and slightly mad, whilst the hero, Dominic, was a charming younger son, who was a twin. I will admit it...the love story was very out-there and it seemed impossible. However, as time went on the story blossomed into a slightly believable romance.

The first quarter of the book bored me too tears, but as the story trudge on it instantly had me hooked! I really wanted to know how everything was going to be resolved and this couple would get their happily ever after. C'mon, its a historical romance! Of course they get their happy ending! *mutters* I wish real life was like that. ANYWAYS, the last 3/4 of the book was a spiral of emotion, action, gasping moments, heartbreak, hope, and finally utter joy. I could barely put the book down.

I also must applaud Mary Jo Putney for being able to write a romance where one of the lovers was mute for the majority of the book. She made it work very well...it takes real talent to do such. I also must give her credit for her ability to give a wonderful male POV, at times I felt like it was really written by a man. Sometimes when a woman writes in male POV (or vice versa) it seems forced and sometimes rather cheesy , however MJP did a wonderful job with creating Dominic's and Kyle's voices.

Which brings me to the point that I really enjoyed the sub-plot of Kyle and his dying mistress. I hate to say I "enjoyed" it, but I did. I really liked Kyle and his little part of the story. I can't wait to read his story in The China Bride. The author did a wonderful job intertwining the major story and the sub-story. It flowed nicely.

Okay...I hinted at this at the beginning, but the romance seemed rather impossible and at times not at all realistic. In reality these two would never had come to fall in love. It seemed like it was to easy for them to be together. This girl, Meriel, had went through some terrible experiences in India and she enfolded herself into her own mind. She hadn't talked to anyone since she was a child and was, well, wild. She did what she wanted, when she wanted. There wasn't much struggle for the two to find love with each other. After a few days, Dominic pretty much had her eating out his hand (and vice versa). It just seemed to happy WAY to FAST and it seemed to easy. It's hard to explain.

All-in-all, I liked this book. It may have been a little impossible, but it seemed to work. The characters were wonderfully displayed, the dialogue was good, and I really enjoyed riding along with this story. I am dying to read the next in the series!  I will, of course, be reading more of Mary Jo Putney's books. She seems like a wonderful author. I'll be granting this book 3 stars...it's more like 3.4, but since I don't give decimals I had to round.

Favorite Character(s): Dominic (a great man, a girl would be lucky to find such a loving and patient man), Kyle (he may express his feelings less than his twin, he seems like a wonderful guy), Jena, and Lucia.

Not-so Favorite Character(s):  Uncle/General Grahame (he seemed slimy to me...and I was right)

Favorite Quote(s): "She wanted to kiss him for his perception, but refrained rather than risk offending his gentlemanly modesty." -Meriel's thoughts on page 180. This had me snorting and laughing like a loon. 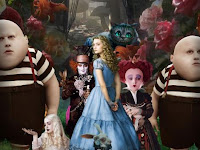 I do not think I could have made it if you were bored to tears at first. I am very unsure...still, it has good things about it too

Sounds like a nice read. And I wish happy endings were guaranteed in real life too. I'm having a small anti-celebration for Valentine's Day. Please accept this symbolic invitation. ;)

Also, we gave you a blog award over at The Feather and the Rose! Just wanted to let you know. :)

Blodeuedd, I was a little unsure too, but I hate NOT finishing something, so I always push myself. I'm glad I stuck to it though.

Susan, I hate Valentine's Day. haha. Yeah, it was a nice read. Awwwww. Of course I accept both the invitation and the award. *tears up* I'll be sure to pop on by!

Love the quote... I can't say that I've ever worried about "gentlemanly modesty" before. Does that even exist?

I've been meaning to mention that I watched all 4 seasons of The Tudors in January, so now I recognize where your header picture is from! :) I'm only 5 yrs behind the rest of the world. LOVED the series. Especially Henry Cavill aka Charles Brandon.

Same here! That's why I love it so! However, it fits Dominic...he was harder to seduce in this than a nun (maybe a little dramatic, but oh well). I felt bad for Meriel!

It's okay! =) At least you watched it. There's been many shows that I'll watch years later or even classic books I take forever to read. haha.

I LOVE Henry Cavill/Charles too.