Book Review: The Time of the Dragon 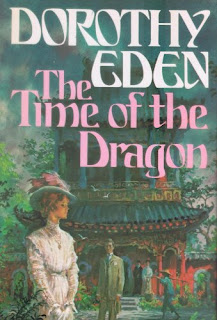 Author: Dorothy Eden
Title: The Time of the Dragon
Genre: Historical Fiction, Romance, Intrigue, Mystery
Pages: 284
First Published: October 1975
Where I Got It: Borrowed it from Library


"Sweeping from China to the Thames Valley, spanning seventy-five years in the fortunes of a great trading dynasty, Dorothy Eden spins a spellbinding tale, of three generations of the Carrington family whose dealings in priceless antiques take them to Peking on the even of the Boxer Rebellion and embroil them in a struggle that will determine their destinies and reach out to touch their heirs even to the present day. When Nathaniel and Amelia Carrington arrive in Peking in 1899, each has reason to rejoice, Nathaniel in the treasures on which he as a successful importer sets his own value, and Amelia in the exotic beauties of the city itself-the delicate loveliness of the peach and plum blossoms, the thin sound of wind-bells in the air, the herons standing stark in the lakes, the labyrinthine rooms of Dragon House, their new home, and the potent sinister fascination of the great Empress Dowager Tz'u-Hsi, like a golden idol at the heart of her opulent palace in the Forbidden City. It was a place to escape and to forget the searing pain of Nathaniel's betrayal with a young governess back in England. But the delights of the Orient prove more fragile than the ancient jades and porcelains the Carringtons have come to acquire. The disturbingly beautiful young American whom Nathaniel insists on hiring as governess to their young family serves only to remind Amelia of past pain. And even more ominous are the rumblings of the coming Boxer Rebellion which echo around the Tartar Wall sheltering the Legation District and its "foreign devil." The tide of Chinese nationalism will not be stemmed, and for eight harrowing weeks the Carringtons, as chief among the desecraters of the Chines heritage, huddle together in the European complex, while marauding Boxers in scarlet headbands and with savage long swords demand their lives. The Chinese Dragon has spewed its venom into the Carrington blood. Two generations later the rebellion still casts its deadly shadow over the family as Suzie Carrington, the only child born after the siege and named after the Empress Dowager, lives out her fantasies in the decaying family mansion on the banks of the Thames. There she writes and revises the will disposing of the fabulous Carrington collection of stolen Chinese art. And with each new draft of the will the reader comes closer to the heart of the Carrington mystery, as intricate and subtle as a Chinese puzzle. Shimmering with suspense and enchantment, The Time of the Dragon is intriguing new territory filled with Dorothy Eden's old magic. The unchallenged mistress of the dynastic novel has written her most ambitious and captivating novel to date."

~*~
I'll be honest...I feel like I didn't technically read this. I skipped a lot and skimmed a lot. I just couldn't get into this story and I didn't really give a hoot about any of the characters. That's pretty sad, but true. I was so excited to read this because it's set in China and even during the Boxer Rebellion! I haven't read many books about this rebellion, but it's always been an interest of mine and so to find a book set in this time period made me dying to read it.


Dorothy Eden did an AMAZING job with her descriptions of the land and the time period. I really felt like I was with the Carrington family in China. While I was reading, I could imagine the surroundings, but I could also feel the ever increasing tension.
Okay, I told a lie...I really did like Amelia, but she annoyed me. I really wanted her to get more of a backbone, but that wasn't the case. She's a smart cookie, but she just lets everyone walk over her. Even though her lack of a backbone annoyed me, I still loved reading her viewpoint.
I'm not sure what else to say...it just didn't do it for me. Even though I didn't like it that much, I would still recommend it to other historical fiction lovers. One man's trash is another man's treasure. ^.^ Overall, I really liked Dorothy Eden's writing style and her word usage. I also liked Amelia. I wouldn't say that I "hated" this. I just didn't care that much. Out of five stars, I grant this one 2 stars. In all reality it would be 1.5, but I don't give decimals, so I rounded. Also...I must apologize for the short review...I just don't have much to say about this book.
Favorite Character(s): Amelia and little George
Not-so Favorite Character(s): Mr. Nathanial Carrington (I just wanted one of the rebels to stab him and end his honorless existence. I can't see why Amelia loved him so, I would have left him)

I know the feeling, my last none Plum Stephanie Evanovich book was like that. I skipped and skimmed

I feel bad, but yeah...at least one person understands how I feel. lol

Hey hon! I just wanted to pop in to wish you a very blessed Christmas holiday!!! Hope Santa brings you what you really want! =) Hugs to you!!!

Hello Cecile! Thanks for stopping on by! I hope you have a great Christmas too. =D *hugs*