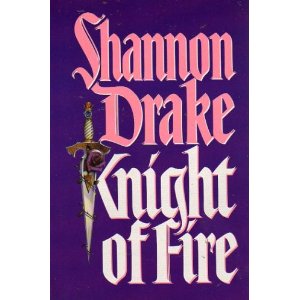 
"He conquered her realm...and her heart.

With gentle words and senusous kisses, the steel-eyed Norman invader, Bret D'Anlou, vanquishes beautiful, defiant Princess Allora of the Far Isle. But one love must ultimatley be sacrificed in the treacherous tides of war - either the kingdom noble Allora cherishes...or the magnificent enemy whose touches sets fire her passions aflame."

The moment I opened the book, I was hooked. The story of Allora and Bret was so intriguing and addicting! Their relationship was a love-hate type relationship and I simply adored it! I had no idea on how they would get together in end (well, of course they get together! It's a historical, smutty romance...duh ^.^). They were just both so stubborn and refused to give an inch...especially Bret. He was a pig-headed Norman, who refused to listen.

I felt so bad for Allora, because she kept finding herself in awkward situations that made her look like traitorous wench. Half the time it wasn't her fault and Bret wouldn't listen to the facts. He would just call her liar and slam the door like a five year-old. However, he kept "forgiving" her and that annoyed me more, because he just didn't get it and I wanted to go into the book and kick Bret in the ass and scream at him. Gah. Sorry, but Bret annoyed the heck out of me.

Shannon Drake did a wonderful job developing the characters and the story. I mean, yes, some parts were very cheesy and not realistic, but the majority of the book seemed to come to life. The story flowed very well and I feel that Shannon Drake did an amazing job intertwining facts with the fiction. Even though I found many parts and fights annoying and irritating, I enjoyed every single one.

Besides for my irritation with the male hero, there wasn't much I could complain about. Even the large amount of sexual situations didn't bug me, because it didn't interfere with the story or seem unnecessary. Yes, the "love making" did get a little old at some points, but hey, Shannon Drake would make up for it in the next paragraph or the next chapter and it seemed to always balance itself out.

All-in-all, I really liked this book. It was a fun read and I simply adored Allora's and Bret's story. I even enjoyed the side characters romance. I can't say WHO, because it's suppose to be a big shocker and I don't want to ruin that for those who want to read this. Out of five stars, I grant this one 4 stars. I would recommend this to historical fiction/romance lovers and those who would like a nice and fun read.

Eh, no thanks. I am sure he would annoy me to death if he acts like such an ass

haha. I agree with you. I wanted to strangle him.