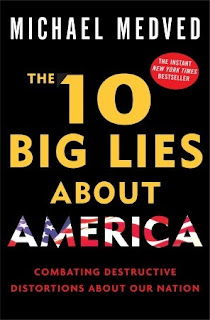 Author: Michael MedvedTitle: The 10 Big Lies About America
Genre: Non-Fiction, Politics
Pages: 288
First Published: November 2008
Where I Got It: Borrowed it from Library


"In this bold and brilliantly argued book, acclaimed author and talk-radio host Michael Medved zeroes in on ten of the biggest fallacies that millions of Americans believe about our country—in spite of incontrovertible facts to the contrary. In The 10 Big Lies About America, Medved pinpoints the most pernicious pieces of America-bashing disinformation that pollute current debates about the economy, race, religion in politics, the Iraq war, and other contentious issues.The myths that Medved deftly debunks include:Myth: The United States is uniquely guilty for the crime of slavery and based its wealth on stolen African labor.Fact: The colonies that became the United States accounted for, at most, 3 percent of the abominable international slave trade; the persistence of slavery in America slowed economic progress; and the U.S. deserves unique credit for ending slavery.Myth: The alarming rise of big business hurts the United States and oppresses its people. Fact: Corporations played an indispensable role in building America, and corporate growth has brought progress that benefits all with cheaper goods and better jobs. Myth: The Founders intended a secular, not Christian, nation. Fact: Even after ratifying the Constitution, fully half the state governments endorsed specific Chris­tian denominations. And just a day after approving the First Amendment, forbidding the establishment of religion, Congress called for a national “day of public thanksgiving and prayer” to acknowledge “the many signal favors of Almighty God.”Myth: A war on the middle class means less comfort and opportunity for the average American. Fact: Familiar campaign rhetoric about the victimized middle class ignores the overwhelming statistical evidence that the standard of living keeps rising for every segment of the population, as well as the real-life experience of tens of millions of middle-class Americans.Each of the ten lies—widely believed among elites and taught as truth in universities and public schools—is a grotesque, propagandistic distortion of the historical record. For everyone who is tired of hearing America denigrated by people who don’t know what they’re talking about, The 10 Big Lies About America supplies the ammunition necessary to fire back the next time somebody tries to recycle these baseless beliefs. Medved’s witty, well-documented rebuttal is a refreshing reminder that as Americans we should feel blessed, not burdened, by our heritage."


I debated myself whether or not to review this book for a while. I randomly found this book in my local library when I was looking for books about Scotland (I wrote a paper on Scotland in my geography class). How odd is that? I think it was fate for me to read this...I'm glad I decided to review this and read this, because the book touches base with many "issues" Americans and others have against the United States.


Professor Hull, my US History professor, had always said its good to have an open ear to different opinions. That was why he always pushed for discussions in class. So when this book came around, I was excited and intrigued to hear this guys opinions. Yes, I call them opinions.


This was a quick read. I could barely put it down. Usually with books like these, the writing seems choppy and rather boring. This isn't the case with this one. Michael Medved's writing style seemed to flow very nicely and it kept me interested. I was also impressed by his examples  and his sources. He seems like an intelligent man and I would be very interested in discussing some of these "myths" with him. I agree with him on about 75% of the things he "debunked", but the other 25% I felt like calling him up and giving him a debate he would never forget.


At times I felt like his "opinions" were strongly biased and one-dimensional. Even though I found his writing to "flow very nicely", at times I felt like he was too emotional and sarcastic about the matters at hand. Also, some parts were dry and very, VERY biased. However, I feel like a learned a lot from the conservative point of view.


Even though I don't agree with him on a lot of points, I can now understand that viewpoint. Since I'm going to school to be a teacher, its always good to learn how to take opposite opinions in stride and understand them. All-in-all, I'm glad I read this book and I learned a lot. I recommend this book to those who would like a good shake up in their reading and for those looking for a good conservative aspect to certain American issues. Our of five stars, I grant this one 4 stars. In all reality it would be 3.5 stars, but I don't give decimals, so I rounded.

Yeah....nope, not the book for me, can't say I care one bit. Would not read a book about my own country either ;)

hahaha, I don't blame you. I would probably never had read this if I didn't randomly come across this. =D

Stepping Out of the Page said...

Great review - It doesn't sound like something I'd normally pick up but it does sound very interesting. Thanks for sharing. I'm a new follower :)

Stepping Out of the Page, thanks and welcome! ^.^