Book Review: The Bow of Heaven 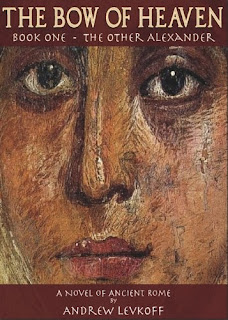 Author: Andrew Levkoff
Title: The Bow of Heaven, The Other Alexander (Book One of trilogy)
Genre: Fiction, Historical
Pages: e-book
First Published: September 2011
Where I Got It: Was given by author to read and give my honest review


"Naive and nineteen, Alexander came to Athens wanting nothing more than to study at Aristotle's famed Lyceum. He could see no further than his self-absorbed dreams, from which he was savagely awakened by Sulla's brutal legions. Free one moment and slave the next, Alexander was wrenched from a life unlived to serve the richest man in Rome.
Stunned and abused, forever barred from the path of his expectations, Alexander was dragged from the ruins of Athens to the center of the Roman world. There he would find his first and only love, but how could he keep her when his fate was not his own, when the ambition and greed of great men were drawing both slave and master inexorably toward war?"

When Andrew Levkoff asked me to read this and review this, I was so excited! As many may know, I love historical novels and when I read the description I was even more excited! However, it took a while for me to get absorbed into the story. The beginning was a little slow (even though a whole bunch was going on) and I felt detached from Alexander, the main character. Once the story progressed and I got further into it the harder it was to get away from it. I wanted so badly to see what would happen next!

As the story progressed, I began to really like Alexander and I began to understand why he was the way he was. I found a lot in common with this poor guy. I mean I've never been taken from my life to become a slave in a foreign place against my will. However, I could relate to a lot of his inner thoughts and feelings. Gotta love a book that you can relate to the main character. ^.^

I also really liked HOW Andrew Levkoff wrote the story. It was like a memoir from the older and wiser Alexander. There was a lot of foreshadow and clues as to what would happen in the next chapter and even in the next book, but just only enough to want you continue reading. His writing flowed well and I felt like I was really in the story as a slave or just a fly on the wall.

The only thing I didn't like was the big skips in time. I know Book One had many years to cover, but I felt like I missing out on major events. I may not have liked these skips, but I COMPLETELY understand the need for them. Without skipping uneventful years, the story would have dragged and been a million pages long. So yes, it was necessary and I'll stop my whining.

All-in-all, I really enjoyed this book and I can't wait to read the next one in the trilogy! It was such an entertaining book and I would recommend this book to anyone who has the slightest interest in history and historical books. There is also a taste of romance, intrigue, action, and adventure. Out of five stars, I grant this one 5 stars. Woot woot! ^.^

Favorite Character(s): Alexander (I could really relate to him and I just liked him a lot), Crassus (which is odd, I'm usually just neutral to him), and Lady Tertulla


Not-so Favorite Character(s): Caesar (an ass), Nestor (gah, what a weasel) and Livia (it was a love-hate thing. Sometimes I liked her, sometimes I wanted to kick her)


Favorite quote(s): "I am most comfortable on the outskirts; being at the center of anything unnerves me, the center of attention in particular" - chapter IX, Alexander.

Wow, you really liked it, nice :D And yes I do not like skips either, but I guess that sometimes they have to happen

I did! I think you would like it too. Its a different perspective. You see Ancient Rome through the eyes of a slave.