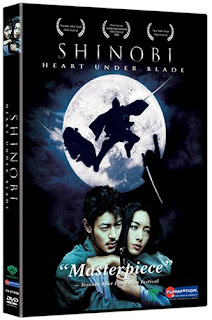 Shinobi: Heart Under Blade is an adaptation of the novel 'The Kouga Ninja Scrolls' written by Futaro Yamada. Also, there is an anime that is based off the novel too, which is called 'Basilisk' (for those of you that prefer anime). The story follows two people who not only fall in love, but are destined to be Shinobi and enemies. There two villages have been hated enemies for hundreds and hundreds of years. However, the Leader of Japan had demanded that they put their fighting to the side and sign this peace treaty. During the peace, Gennosuke and Oboro meet by the river and fall in love. However, this peace will be tossed to the side because the Leader Tokugawa Ieyasu wants to rid of these Shinobi to "consolidate" his rule. He tells to pick their best five warriors and let them fight it out and whoever is left standing will win victory for his/her clan. Of course, Oboro and Gennosuke are picked....

There wasn't anyone I really know from this film, which is okay. Joe Odagiri (Blood and Bones, Princess Raccoon) played the sweet and peaceful-minded Gennosuke, Yukie Nakama (Trick) as the lovely Oboro, Mitsuki Koga (The Fast and Furious: Tokyo Drift) as the badass Chikuma Koshiro, and etc. At the end of the review I'll post a little extra about the characters and they're pretty neat powers.

I've heard nothing but great things about this movie! I knew I would like it, so I allowed myself to buy this off of Amazon. Too be blunt, I did not waste my money. This movie was pretty epic! Even my mom sat down and watched this with me (which annoyed me slight, because it was halfway over and I had to explain to her what happened at the beginning *sigh*). Mind you my mom doesn't really like movies with major fighting or wars or any sort of torture. Anyways...

This movie is mix of Romeo & Juliet, X-Men, and Japanese culture. A very odd mix, but somehow it worked! I simply loved the special effects, the choreography, the dialogue, the costumes, and especially the plot. The acting was fantastic, I was worried that the acting may not hold up against the plot or the fighting scenes. Everything was well balanced and the cheesy love lines were pretty much nonexistent, which made me very happy. I found myself jealous of Oboro, because Gennosuke was such a hopeful romantic. He knew in his soul that even though they were destined to fight each other, that they belonged together and peace will finally come to both clans.

In the summary it does say "tragic" so you know darn well that this is a doomed love, but you can't help but root for these two people and clans to unite in peace. I really liked everything about this movie, except for the ending and how they didn't focus more on the romance set-up aspect. I would have loved to see more of HOW they fell in love. Sometimes I felt like they were just in love with the idea of being in love, but that's just me being accustomed  to more affectionate "lovers". The movie makers seemed to just assume we only wanted ninja-on-ninja fist/weapon exchange, not ninja-on-ninja love exchange. WRONG! Is what I proclaim.

BUT the lack of romance didn't bug me as much as the ending...which still irks me a little now.*SPOILER*  I couldn't believe that Oboro actually killed Gennosuke and he let her! I know that only one could live, so they could confront the Leader Tokugawa Ieyasu and tell them to leave the villages alone. You know Gennosuke could have faked his death or something, but why? WHY? *SPOILER ENDED* I'm glad I got that off my chest. I understand the reasoning of this ending, because my mother lectured me about the "true" meaning of this movie. You should be able to sacrifice yourself for the better of your family and yadda yadda. That's great and all, but why? Why did the writers have to end it like that? Sometimes I wish I could go back in time and force the writer of certain books and movies to change the ending. Like when Billy Shakespeare wrote the dreaded 'Romeo&Juliet'. However, such a thing is impossible.

Other than the ending making me ask a million questions and wanting to slam my head on the desk, I loved everything about this movie. It was well-balanced and it deserves more attention than its received in the US. I know for sure I'll be watching this over and over again. Out of five stars, I grant this one 5*s. ^.^ I recommend this to any movie lover, action film addict, martial art filled movie fantic, and even to those who love love stories. I especially recommend this to those who love the X-Men Films/comics.

(Here's the little extra I promised to share)
From the Kouga Clan:
~Gennosuke - the new leader who has the power to see, react, and move at very high speeds. He moves so fast that he can turn a weapon against it's master. He also has the saddest pout face on a man. He's adorable. 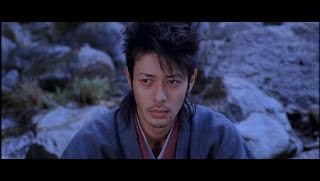 ~Hyouma Muroga - he has the ability to sense things and people a far far away. It's like a 6th sense, I am guessing. He also has the same power as Gennosuke, but he has to keep his eyes closed or he make accidently kill the wrong person (or so they tell me). 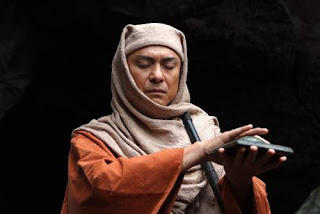 ~Koshiro - In the movie he doesn't have any real "powers" but he's pretty clever with weapons and is the best. Plus, he's so serious about fighting and whatnot I couldn't help but think he was oddly cute. Haha.

~Kagerou - she's a poison specialist. Oooh. Poison flows within her veins, so she can give off a poison mist or too save time just kiss the enemy and BOOM. Dead.

~Saemon Kisaragi - he can assume the appearance of others and copy their voice. So he would be the best to influtrate the enemy camp. Also, he's pretty tricky in dodging around the woods, because he can also teleport! 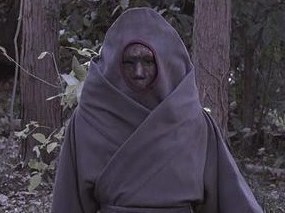 Now From the Iga Clan:
~Oboro - the new leader who has the eyes of doom. When she so choses she can incapacitate an opponent with just a glance. Ew. 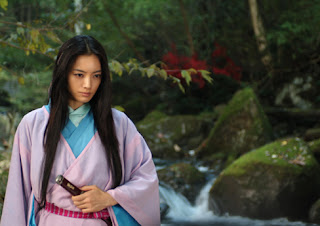 ~Tenzen - he has parasitic worms swimming around his body which prevents him from dying, because it heals any wounds he gets....except for one....

~Yashamaru - he can whip thin wires around that are attached to his sleeves. Different, because they are sharp enough to cut through things too. 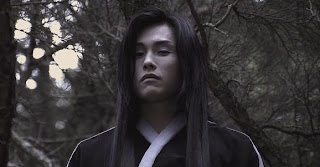 ~Nenki Mino - the Japanese version of the Wolverine, but more animal-like. He has a great sense of smell and super sharp nails.

~Hotarubi - she can use a dust the manipulates butterflies and moths. It's another interesting power. 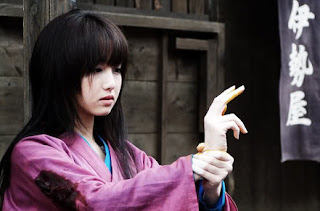 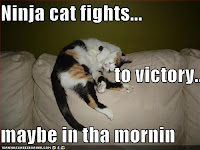 I think you would like it! ^.^ It is pretty epic, I personally believe

Thanks for the referral, I've just finished watching it. Awesome flick pick

No problem Robyn! It was a good movie.