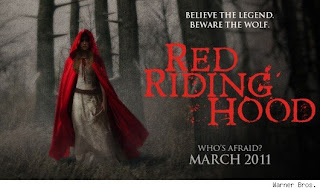 Length: 100 mins
Released: 2011 (USA)
Genre: Fantasy
Rating: PG-13, violence and creature terror and some sensuality
Directed By: Catherine Hardwicke
Where I Got It: The Redbox with Sarah
Red Riding Hood is loosely based of the folktale of 'Little Red Riding Hood' and the Grimm Brothers 'Little Redcap'. Instead of the little girl we are so use to, the story follows the story of Valerie (who is all grown up) and her village that is being haunted by a Werewolf. Not only is the village being haunted by this mysterious Werewolf, but its also being haunted by a love-triangle. Valerie is in love with Mr. Mysterious, aka Peter, but she is engaged to the baby-faced Henry. However, Valerie's sister is in love with Henry, so I guess this is a love-square. I don't know. However, the story picks up after Valerie's sister is killed by the Werewolf. This murder brings up the question....who's the werewolf?
There are a lot of familiar faces starring in this film, but there are a lot of faces I don't recall. Amanda Seyfried (Dear John, Mama Mia!) plays the very grown-up Valerie the Red Riding Hood, Billy Burke (Twilight Movies, Ladder 49) as Papa Red Riding Hood, Gary Oldman (Harry Potter, Dracula, Hannibal) as the cold-hearted Father Soloman, Max Irons (Being Julia, Dorian Gray) as the baby-faced Henry, Shiloh Fernandez (16 to Life, Dead Girl) as the "Sexy" Peter, and Julie Christie (Hamlet, Troy, Harry Potter) as the not-so helpless Grandma.
REVIEW:
This movie was directed by Catherine Hardwicke. For some reason, I'm not a Catherine Hardwicke fan....it's hard to explain. I couldn't stand how she showed 'Twilight' on the big-screen. Even with the knowledge of her directing this movie, I couldn't help but watch this. I tried my hardest to go into the movie empty-minded and without judgement...which is hard.
Well, to put it simply....it was okay. I'm so glad I did finally get my chance to watch this (Sarah rented the movie and forced me to sit still and watch). At first I wasn't much into it, when I found out there was a this huge love-triangle. E-gag. I felt like I was watching 'Twilight' but in the middle ages during a werewolf haunting. I'll admit that I texted a lot while watching this. However, as the story-line picked up a little more I became more involved. The 'Twilight'-feel was pretty much gone once Father Soloman appeared. If I could I would hug him and kiss him.
I adored the costumes and the props and some of the acting was good. Some was, well, lacking. It's probably not their fault, because the writing was highly flawed and needed some editing. The actor can be only as good as the script that is handed to him/her. I also hated the ending, because it was predictable and rather dumb. I wanted to slap Valerie (Red Riding Hood) and Catherine Hardwicke.
All-in-all, I adored a lot of things, but there are a lot of negatives about this movie. Mostly Catherine Hardwicke and her over using the love-triangle theme. They didn't focus enough on Red Riding Hood, Grandma, and the Wolf. I felt like I was watching a parody of the original mixed with 'Twilight' (which I do love, but c'mon). The fell a little flat in my expectations, but it was decent. I do recommend this to those who love folktale remakes and 'Twilight' super-fans. Out of five stars, I must give this movie only 2*s. Sorry. =(
Favorite Character(s): Henry and Peter (I think I would pick Henry...mhmm.) and Grandma
Not-so Favorite Character(s): Suzzette and Father Auguste

Ok, I agree. The thing I liked is that I could not guess who the wolf was

lol, yeah not a personal favorite of mine...but I guessed who the wolf was. Well, I had two guesses and my second guess turned out to be right and my first guess was kind of right...