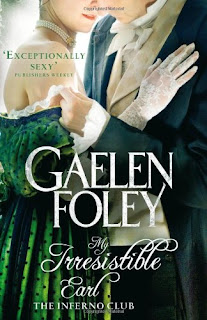 
"The Inferno Club: In public, this scandalous society of London aristocrats is notorious for pursuing all manner of debauchery. But in private, they are warriors who would do anything to protect king and country . . .

Once, she had vowed to marry the Earl of Falconridge. Now, she vows to forget him. After he abandoned her for a life shrouded in secrets, Mara, Lady Pierson, has succeeded in keeping him away, until he appears in London unexpectedly, making her fall in love all over again.

Forced back into Mara's life by duty, the earl quickly stays for love. He has never forgotten this passionate beauty and never meant to break her heart. But their newfound happiness is endangered—because the Inferno Club demands much of its members, and his vital mission is exposing a deadly plot that could threaten their very lives . . ."

This is 3rd novel in Gaelen Foley's Inferno Club series. Unlike the other two, I don't really think you can read this as a stand-alone, because she doesn't go into much description of WHAT the Inferno Club really is and the history of this "club". She touches lightly on this in this book, so I advice for you to read one of the others first. That's just my opinion though.
I really liked this book. Gaelen Foley did a great job by giving the readers of this series something different , because unlike the other characters these two lovers had a past history. They had been in love and they had been separated by Jordan having to go be spy and whatnot for his country. In this book, Gaelen Foley shows that sometimes your first love IS your true love and I loved this! I really adored the flashbacks that they had of each other, I found this to prove they were meant to be together. I also loved how Gaelen Foley made the characters full of realistic flaws. I found myself really rooting for them to get over themselves and become one again.
Some say the story was a little jumpy and had a lot of subplots and I do agree, slightly. There were a lot of subplots that took away from the Jordan-Mara love story, but that happens. I did get annoyed a lot by the sudden story shift to Albert or Drake, who I adore. Perhaps she put more subplots in this book, because we all knew that Jordan and Mara would end up together. I think the jumpiness was the only thing I didn't like about this.
Like I've previously stated, I can't get enough of Gaelen Foley's books. I love the characters and stories she presents. I'm highly addicted to her books and I'm dying for the next on to come out, which isn't coming out until January or December (ugh)!
Well, Gaelen Foley has yet again struck with a fantastic book. If you haven't picked up any of her books, you should! Especially this Inferno Club series, which is turning out to be a great one. Out of five stars, I grant this one 5 stars. Huzzah!
Favorite Character(s): Drake, Jordan, and Mara
Not-so Favorite Character(s): Dresden Bloodwell and Albert
Quote That Has Stayed With Me: Pg. 376, Chapter 21, "Flawed she was, oh yes, but her imperfections only made her more lovable to him. They meant she needed him, and Jordan had always been someone who longed to be needed."

I must try a book by her, I do have one, well two since it is a two in one .D