Blodeuedd's Monday Review - In Search of Us by Ava Dellaira 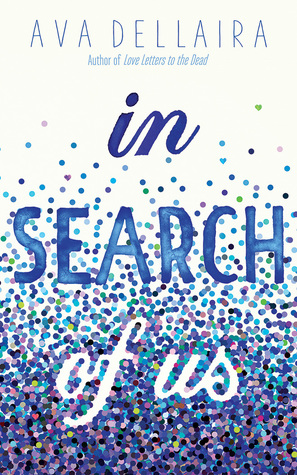 I was not sure about this one at first, but later I saw that it was how it went from Angie's story to Marilyn's that confused me. Audio can be hard that way. When I understood that it was a 2 pov story then it flowed better.

Angie grew up with a young single mom. And then she finds out her uncle might be alive, is her dad too? Oh Angie, I mean how your mum can't even talk about him I doubt it. She takes off with an ex (how she meant to find him in a city of millions I do not know.) I absolutely understood why Angie wanted to find out where she comes from.

The other POV is 18 years earlier when Marilyn and her mum moves in with her uncle (who is an alcoholic ahole). Her mum is pushing Marilyn to become a model/moviestar, and Marilyn just wants to go to college. And then she meets a boy...

I did not understand why Marilyn just did not tell Angie more about her dad, but at the end, sigh, I understood, and my heart broke. But still, Marilyn knew someone for less than a year and never moves on?

It came to a point where the book made me cry. It was just so true... I liked the book.

Good narrator too. All her voices flowed well

This sweeping multi-generational love story introduces readers to mother-and-daughter pair Marilyn and Angie. To seventeen-year-old Angie, who is mixed-race, Marilyn is her hardworking, devoted white single mother. But Marilyn was once young, too. When Marilyn was seventeen, she fell in love with Angie's father, James, who was African-American. But Angie's never met him, and Marilyn has always told her he died before she was born. When Angie discovers evidence of an uncle she's never met she starts to wonder: What if her dad is still alive, too? So she sets off on a journey to find him, hitching a ride to LA from her home in New Mexico with her ex-boyfriend, Sam. Along the way, she uncovers some hard truths about herself, her mother, and what truly happened to her father.

Email ThisBlogThis!Share to TwitterShare to FacebookShare to Pinterest
Labels: Audiobook review, Ava Dellaira, B's Mondays, Blodeuedd, In Search of Us

Awwwww it made you cry!