Blodeuedd's Wednesday Review: The Footman and I by Valerie Bowman 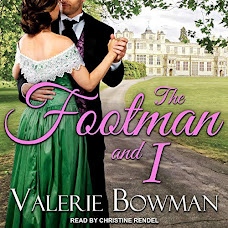 Pretending to be servants to see what ladies really are like, well, not the best idea gentlemen.

Frances was nice, and sure intense in her fight for the rights of the poor. And considering that her dad gambles then soon she wont have anything either. Her mum was a usual ton lady who wanted to marry poor Frances to a boring lord.

Lucas is a new Earl, and all the mamas are circling him, so he dresses as a footman, and falls for Frances because unlike other people, she saw him, a footman.

Obviously he does not tell her, and I am not spoiling anything when you guess where the drama comes from. But I liked it, and I liked that they actually took their time.

Nice narrator too, clear voices, and she held my attention

Every fortune-hunting female in London is after the newly titled Earl of Kendall, but he’s intent on finding a wife whose heart is true. So, while drunkenly jesting with his friends in a pub one night, he has an idea—what if the ladies of the ton didn’t know he was a wealthy earl? All he has to do is pose as a servant at his friend’s summer country house party and make sure the guest list is full of beautiful, eligible debutantes. What could possibly go wrong?

Miss Frances Wharton is far more interested in fighting for the rights of the poor than in marriage, but her mother insists she attend a summer house party—and find herself a husband. Frances would rather wed a goat than the pompous man her mother has in mind, so in order to dissuade the would-be suitor, she vows to behave like a shrew. The only person she can be herself with is the kind, handsome footman she runs into at every turn. Their connection is undeniable, and the divide between them is no match for the passion they feel. But what will happen when Frances learns that the footman she adores is actually the earl she despises? In a game where everything is false, can they convince each other that their love is true?

It was different and a nice change

Neat how he was able to see that she noticed him before knowing who he really was. I think this would be a good one.