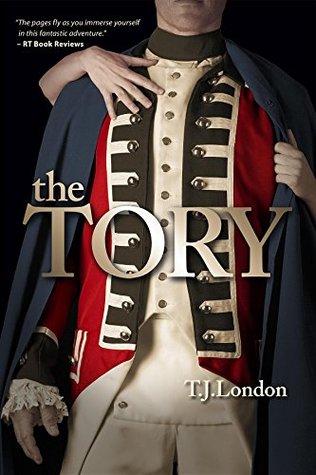 Author: T.J. London
Narrator: Shane East, Tara Langella, Patrick Zeller, Marnye Young
Title: The Tory
(The Rebels and Redcoats Saga #1)
Genre: Historical Fiction & Romance
Format: Audiobook
Published:  April 11th 2018
Where I got It: My shelf (Given to me by the author/publisher for my honest and unbiased opinion)
Summary: It is the winter of 1776, and Captain John Carlisle, one of His Majesty’s not-so-finest, has gone back to the scene of the crime to right a wrong so dark it left a permanent stain on what was once an illustrious career and left a man broken, defeated, in search of justice…
In an effort to win back his commission, he must discover the true nature of the relationship between the Six Nations of the Iroquois and the Colonial Army. Undercover as a war profiteer, John travels to the treacherous Mohawk River Valley and infiltrates local society, making friends with those he’s come to betray.
But a chance meeting with a beautiful half Oneida innkeeper, whose tragic history is integrally linked to his own, will provide him with the intelligence he needs to complete his mission—and devastate her people.
Now, as the flames of war threaten to consume the Mohawk Valley, John has the chance to not only serve King and country, but to clear his name. When the truth he uncovers ties his own secrets to those in the highest positions of the British military and threatens the very life of the woman he’s come to love, he will be forced to make a choice…
Review:
When I seen this I could not help but want to check it out!
The story follows disgraced John Carlisle who has been given a second chance to redeem himself and prove his loyalty to the Crown but at what cost? He has to go back to where everything went wrong and were his demons hide. He goes back undercover to uncover the relationship between the Six Nations of the Iroquois and the Colonial Army. He meets the beautiful innkeeper who also has a tragic past that unknowingly is linked to John's.
This was an intense listen. The narrators were awesome and had me needing to listen to more and more. I could not put this down! I had to know what was going to happen next.
Everyone has secrets and not everything is black and white. The author did a fantastic job showing this. Even our baddie cannot be simply summed up. He is certainly evil....but he isn't all there either from what I can see. It made it a really interesting read for sure because you really don't know what anyone is capable of. Loyalty is fragile.
Poor John. Poor Dellis. I am rooting for them but it is not at all an easy romance especially when the truth comes out. They both have their demons...especially John. It did take me a few to get actually like John...but I feel like that was the point. He is a scoundrel and rake and likes to drink and be in business with a prostitute. It was nice seeing him grow up and find love in his heart. He's not all the way there yet, but he is really redeeming himself.
Ooooo I can't wait for book 2! This left off with such a big cliffhanger!!! I need to know what happens next! There is something big coming and I feel like not everyone is going to survive this.
This is a dark world at times so just be warned there are some...dark scenes and some are a hair gruesome (ignore my bad pun here). They don't last long and that made me happy, but it is necessary to really get you into the world and see that it was for sure the Wild West before the actual Wild West. War is a nasty business.
Overall, I really, really liked this book. The narrators were fantastic and the story kept me on the edge of my seat. I can't wait for book 2!! I'll stamp this with 5 stars.

Challenge(s):
- #45 for Audiobook Challenge
- #8 on THE BAD BOYS OF ROMANCE challenge

Sounds good! I wonder what those bad things that happen were