Blodeuedd's Monday Review: A Duke a Dozen by Shana Galen 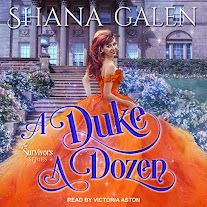 I like this series. The survivors of a doomed troop from the war. This time we did not have time to hang out or meet the rest of the gang. This was Finn's book. Oh and his older lady, wink wink.

Finn comes to Annabell thinking she had slept with his brother, cos she is the Wanton Widow after all. Of course that is just the Ton gossiping cos a widow liked to have fun once! Anyway, his brother is dead and he has questions. Which leads to him helping her out. Roadtrip!

She is almost 15 years older. She has issues with men after her horrible marriage.

He is a young Duke who needs an heir, and a spare.

They become friendly, they want to become more, there can never be a happy ending, or?

I was all for a widow of 45 finding love again. You go girl! And getting a young Duke on top of that.

I enjoyed it. There was also a little romantic sidestory too about someone close to them, no spoilers.

I have listened to Ashton many times and she is always good. She does historical romance well. Voices, tone, everything. She takes you back.

They call him the Doomed Duke.

Phineas Duncombe, ninth Duke of Mayne, should not be the duke. After all, he had four—count them—four older brothers! Phin never wanted the dukedom, and the suspicious circumstances of the eighth duke’s death lead Phin to question the Countess of Longstowe. The beautiful widow isn’t at all what Phin expected. He’s intrigued by her and determined to seduce her. The countess is not interested in Phin romantically, but when she comes to him with another request, he can’t deny it. A few days in the country with Lady Longstowe reveal two truths to the new duke. One, he cares for the countess much more than any other woman he’s ever known. Two, Phin either has very bad luck or someone is trying to kill him.

They call her the Wanton Widow.

Annabel was barely eighteen when she was married to the elderly Earl of Longstowe. A harsh, sadistic man, the earl’s death was not something Annabel mourned. Now in her mid-forties, Annabel enjoys her widowhood and has no desire to ever be under a man’s thumb again. Not even a handsome duke like Mayne, who is far too young for her anyway. Annabel’s one desire is to find the daughter who was taken away from her. For that she needs a man with power and status. She needs the Duke of Mayne. When the two are thrust together, Annabel struggles to fight her attraction to the charming Phin. She’s losing the battle. But can she ever trust another man, especially with the one part of herself she’s never given away—her heart?

It's been a while since I haven't read this one

I haven't picked up a Galen book in a while. Hers are always light and fun.