The Bachelor’s Bride by Holly Bush

Genre: Romance/America/Victorian
Series: The Thompsons of Locust Street, Book One

1868 Elspeth Thompson is the middle daughter in a family with tightly held secrets. While she loves her family, she longs to break out from their overprotective hold, to find herself, to be noticed for who she is rather than as chaperone to her beautiful younger sister, Kirsty, or underling to her elder sister, Muireall. A chance meeting under scandalous circumstances offers her the opportunity to be seen for herself, but the repercussions could lead to the downfall of her family.

Confirmed bachelor Alexander Pendergast enjoys his position as the right-hand man of one of the most influential and powerful politicians in Philadelphia. Heir to the largest textile mill on the east coast, Alexander is handsome, charming, and the ultimate catch on high society’s matrimonial market. But he has no interest in settling down with a pampered debutante. He doubts the perfect woman for him actually exists…until he meets Elspeth Thompson.

But the Thompsons and Pendergasts move in different circles, and Elspeth has no desire to be judged and found wanting by Philadelphia’s first families. Though she tries to resist Alexander’s charms, when he comes to her family’s rescue, she knows there’s more to him than she’d first thought. But Alexander realizes that his ambitions may have placed Elspeth and her family in grave danger. With an unseen enemy determined to uncover the Thompson family’s secrets, Alexander grapples with secrets of his own, secrets that could cost him the only woman he’s ever truly cared about.

When Elspeth finds herself in terrible danger, can she muster the inner strength of her ancestors to save herself and her family and find the courage to meet love head on?


Available for Pre-Order on Amazon & Barnes and Noble 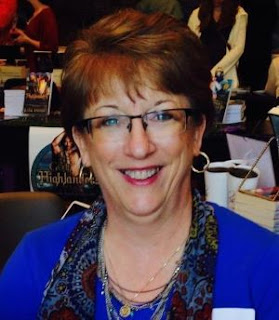 “Love always has something to say. Sometimes it shouts from the highest hill, and sometimes it whispers so softly one must listen closely to hear. Do not turn away. It is a rare and precious commodity. Treasure it.” The Gentrys of Paradise

Holly Bush's historical romances are set during the turbulent and transformative years of the late 1800’s. The first two books in her newest series, The Gentrys of Paradise, released in the spring of 2017 and began with the novella Into the Evermore where readers meet Virginia horse breeders, Eleanor and Beauregard Gentry. The following books feature their children, Adam, Matthew, and Olivia. For the Brave is Matthew’s story and is the first full length book of the series. Olivia's book, For This Moment, released in the spring of 2018. The final book, For Her Honor, is now available.

She also writes General Fiction under the name of Hollis Bush.

Holly makes her home with her husband, one happy Labrador Retriever and a clever Jack Russell rescued from the pound, and two difficult cats in Lancaster County, Pennsylvania. Connect with Holly at www.hollybushbooks.com, on Twitter @hollybushbooks, and on Facebook at Holly Bush. Follow Holly on her Amazon author page to receive new release updates and on BookBub to check out her reviews and get sale information.

Tuesday, October 27
Probably at the Library

Saturday, October 31
Passages to the Past

Thursday, November 5
What Is That Book About

Sunday, November 15
WTF Are You Reading?

The giveaway is open to US residents only and ends on November 16th. You must be 18 or older to enter. 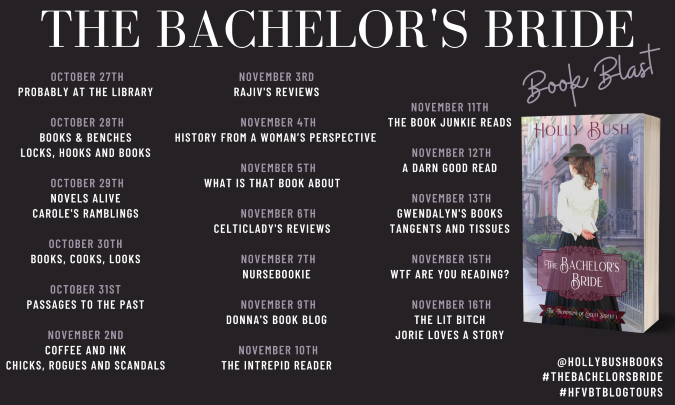 Looks like a likeable pair and some good mysterious secrets.

Thank you so much for hosting The Bachelor's Bride Book Blast today!

Thanks for having me!

Amy and Holly, thank you for having me!