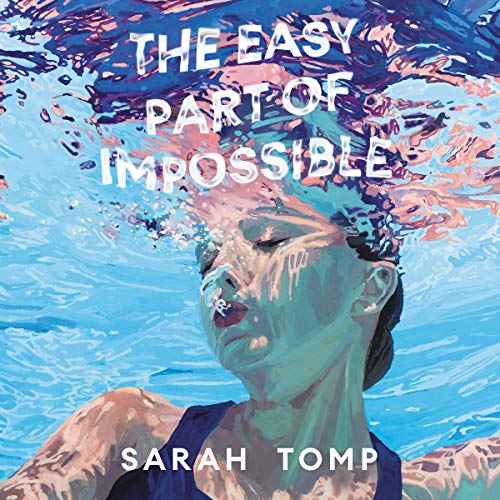 
For what I thought would be one of my emotional YA ones, but it was more denial denial.

Ria was aiming for the Olympics, now she has given it all up and is drifting and doing teen thing she never had time for.

Also what happened to Esther!?

It is also about her meeting someone new, a new friend, getting a new hubby. Slowly reaching the closure she needs. I liked Cotton, and I guess she really needed someone who saw, and who would not judge (but then she was in denial).

Oh, and I will never go caveexploring, just saying.

It was a good one, I liked the narrator. She was great as Cotton and Ria. As always the narration makes the book

After an injury forces Ria off the diving team, an unexpected friendship with Cotton, a guy on the autism spectrum, helps her come to terms with the abusive relationship she's been in with her former coach.

Ria Williams was an elite diver on track for the Olympics. As someone who struggled in school, largely due to her ADHD, diving was the one place Ria could shine.

But while her parents were focused on the trophies, no one noticed how Coach Benny's strict rules and punishments controlled every aspect of Ria's life. The harder he was on her, the sharper her focus. The bigger the bruise, the better the dive.

Until a freak accident at a meet changes everything. Just like that, Ria is handed back her life, free of Benny.

To fill her now empty and aimless days, Ria rekindles a friendship with Cotton, a guy she used to know back in elementary school. With Cotton, she's able to open up about what Benny would do to her, and through Cotton's eyes, Ria is able to see it for what it was: abuse.

Then Benny returns, offering Ria a second chance with a life-changing diving opportunity. But it's not hers alone--Benny's coaching comes with it. The thought of being back under his control seems impossible to bear, but so does walking away.

How do you separate the impossible from possible when the one thing you love is so tangled up in the thing you fear most?
Written By Carole Rae at 6:30 PM

Srsly, just no. Trip and fall down to Australia