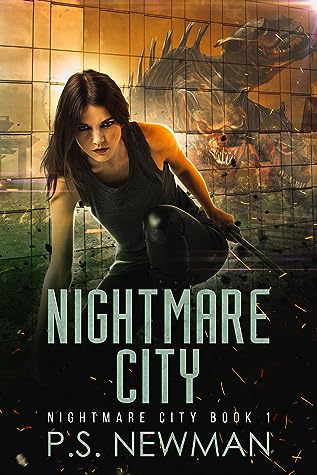 In post-apocalyptic Los Angeles, dreams come true. So do nightmares.

Ever since a shift in reality twenty years ago, peoples' dreams and nightmares come alive, spreading chaos and destruction. Monsters ravage cities, bottomless chasms split roads, and gold rains from the sky - the possibilities are limitless, unpredictable and often deadly. Eden Maybrey is a hunter of these "shades". When a friend tasks her with tracking down and eliminating an evil shade, the hunt threatens to expose Eden's deepest, darkest secret. To find her prey, she is forced to team up with Vaughn Taylor, a hunter who hates shades with a passion - and who won't hesitate to put a bullet in Eden's head should he figure out the truth.

I could not resist this one! The concept is so cool! It fell on the back-burner for a while, but I am so glad I was able to finallllyyyyy get into this one.

The story is set in LA after a terrible event happened years previously. Dreams AND nightmares can come true LITERALLY. It's unpredictable and can be deadly. They call these manifestations "shades". We follow Eden who is a hunter of these shades and is tasked to get rid of them. There are many other hunters out there, but there is something different about our Eden and she cannot let the world know what it is. When a friend manifests a shade, he hires Eden to take care of it, because it is dangerous. So dangerous it puts Eden and everyone she loves at risk. She is forced to team up with Vaughn Taylor is who is anti-shade that even fellow hunters worry about him.

Loved Eden. She was kickass!

Loved Cece too. She was kickass.

Aunt Vy the sword was a hoot and she was certainly a fun "character".

Sean was fishy to me.

Loved David. He was so sweet to Cece and her baby sister.

Bella.....hate you. Hate you, hate you, hate you. I get you are a teenager who really went through some stuff. But you are manipulative and terrible. Someone needs to kick her ass. Maybe Eden will one day. But seriously Bella...get your head out of your arse.

Besides for my loathing for that snot-nose kid, I really enjoyed this. I could NOT read this fast enough especially near the end. THAT TWIST! I guessed it, but I thought I was just being a negative nancy and cynical, but OMG. Danggg I need book 2 now!!!!!!


Okay - okay. Overall...this was awesome and fun. I highly recommend it. 5 stars.

PS - Yes, I was bored so I had a little fun with doing HTML and formatting lol. Let me know if you like it! Maybe I'll force myself to not be lazy for future reviews/posts ;)

Yeah, that does sound like an intriguing backdrop to the story. Oh no, bratty kid, but yay for a wonderful cast of friends. You have me excited to try this one, too.

Oh, and your HTML work does look great. :)

Oh that's great for this one

The format looks great! Nice work. Once you have a good format, you can copy and paste, changing the important bits.

This one sounds fabulous and totally went under my radar. Glad you enjoyed!

Sophia, ugh yes bratty kid. But this was such a fun one! Thanks!

B, I had that dry spell too. Finally had a couple

Jen, true true. And thanks! I think this was a hidden gem.