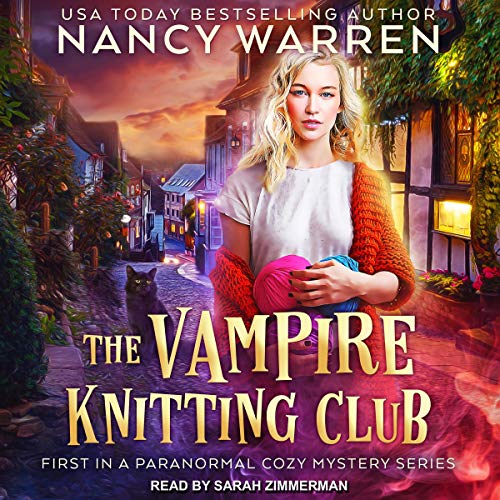 This was short and amusing. Plus is has vampires knitting, that was strange and good.

Lucy inherits a knitting store from her gran, and Lucy can't even knit! She also starts wondering if her gran was murdered...

Which ok the blurb does spoil it and then there is the whole title, so yes her gran was murdered and she is now a vampire. And vampires in Oxford seems to enjoy knitting.

Something strange is happening. Who kille her gran. Is there something else going on? Ok, I can't say more, but things are going on. And since it is a short book the mystery is solved quickly...but i was still wrong!

narrator
She did a great job with all the characters. I liked her Lucy voice, it felt very, well that I would have liked Lucy in rl too

At a crossroads between a cringe-worthy past (Todd the Toad) and an uncertain future (she's not exactly homeless, but it's close), Lucy Swift travels to Oxford to visit her grandmother. With Gran's undying love to count on and Cardinal Woolsey's, Gran's knitting shop, to keep her busy, Lucy can catch her breath and figure out what she's going to do.

Except it turns out that Gran is the undying. Or at least, the undead. But there's a death certificate. And a will, leaving the knitting shop to Lucy. And a lot of people going in and out who never use the door - including Gran, who is just as loving as ever, and prone to knitting sweaters at warp speed, late at night. What exactly is going on?

When Lucy discovers that Gran did not die peacefully in her sleep, but was murdered, she has to bring the killer to justice without tipping off the law that there's no body in the grave. Between a hot 500-year-old vampire and a dishy detective inspector, both of whom always seem to be there for her, Lucy finds her life getting more complicated than a triple cable cardigan. The only one who seems to know what's going on is her cat...or is it...her familiar?
Written By Carole Rae at 6:30 PM

I'm in love with the cover and the title. So fun and cute!

Carole
There are many more

Mel
I think that you would enjoy it